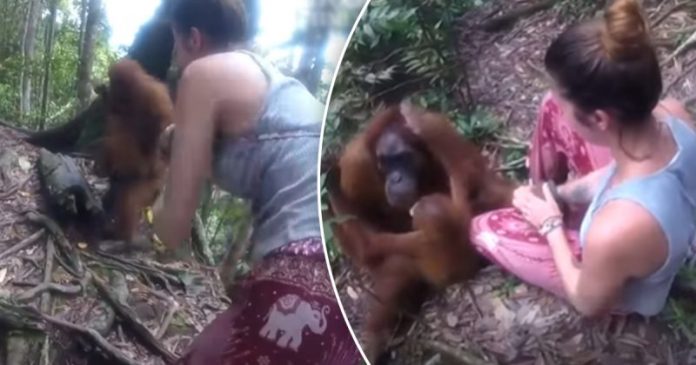 People who are animal lovers often go for a thrilling adventure in unusual places. When vacations are usually spent traveling or going to the beach, people who love animals would rather spend time in forests or visit a zoo in a different country. There, animals love to be fed snacks or fruits. Since the forests are sometimes bare, they take advantage of what visitors hand over to them. However, such acts can be dangerous if we are not careful.

Recently, a video went viral showing a woman being held ‘captive’ by an orangutan. The incident happened in a forest in Indonesia, wherein a female orangutan approached a woman, held her hand tight, and would not let go.

“During our trip to Bukit Lawang jungle in Indonesia, a female Orangutan grabbed my girlfriend’s hand for about 3 minutes, and the guides didn’t know what to do,” the man behind the camera wrote online.

For multiple times, the woman tried to pull away from the primate, but to no avail. The female orangutan strongly held on to her hand and at times tried to nibble on her fingers, but the woman turns the primate’s face away. Soon, they sat together on the ground with the orangutan still holding on.

The woman’s companions tried to lure the orangutan away by handing her fruits and nuts, but still to no avail.

The woman tried to stay calm throughout the scary incident. The situation lasted for about three minutes before finally, the orangutan let go of her hand. The primate was lured with some fruits as they stayed far away from the woman, and she finally let go of the woman’s hand to accept the fruits being handed to her.

Some people may find this incident funny, but it was quite dangerous, and the woman was only doing her best to stay calm, despite the thrilling anxiety she was feeling. Orangutans are animals in the wild, and it may be possible that they may harm anything or anyone that poses a threat to them.

If you desire to view animals in the wild, know their characteristics and keep a distance from them. Do not provoke, distract, or get their attention, or they may do something very unexpected.