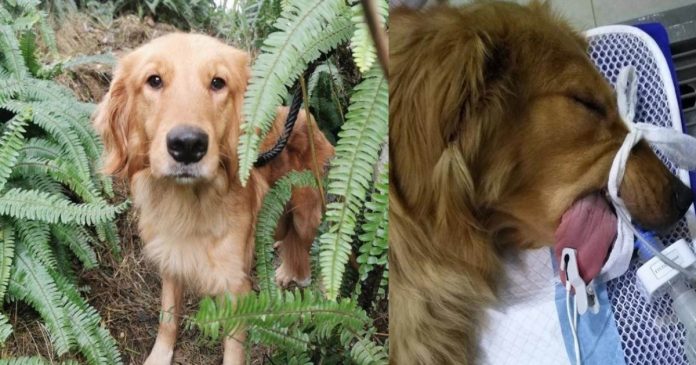 There are millions of people who love dogs, and there are others who, no matter how they try, can never get along with them. The dogs in return can sense these emotions from people. Though we are dog-lovers or otherwise, they can bring happiness into our lives.

When dogs are healthy, they are bubbly, cute, and well-mannered. When they are sick, they are in low spirits and weak, and they usually stay in just 1 area.

The older dogs, though, rely more on their masters and their movements are not as lively as when they were younger. They are fed, bathed, and taken care of by their masters. These are the loyal dogs.

However, some people keep dogs for their ability to guard their houses and only if they remain obedient. Once they are useless, most of them are abandoned and given up immediately!

Recently, a woman passing by the woods rescued a golden retriever. When she saw the poor condition of the pooch, she wondered how long it has been staying there, and she immediately knew that it was starving.

“It was tied on a tree near the bridge, surrounded by weeds, and the sound of cars suppressed its barking.”

The Golden Retriever was discovered by the woman near the Shahi Bridge. It was standing near the tree in a daze but immediately formed a bond with the woman who rescued it.

The dog was damp with dewdrops, and its frail body seemed to fall many times, the gazeless eyes, the stench of its body, and the rope tied to the tree made the message clear that the owner of the golden retriever no longer needed it.

The pet owner is so cruel to the golden retriever, leaving it tied to the tree for (who knows) how long, and clearly not wanting the poor dog to be found!

Fortunately, the woman was passing by and rescued the poor canine. Though how long the dog was tied on the tree was unknown, it is hard to imagine a dog living without food for a long period, let alone a sick Golden Retriever. The woman decided to bring the dog to a vet without hesitation. “No more going through life in helplessness and despair,” she thought.

Saving the dog sent a warm feeling to everyone’s hearts.

Seeing the woman for the first time, the dog did not hesitate to call on her. It may have been the first time they have seen each other, but the form of bonding was immediate.

Despite having a strong smell on its body, the impression of the woman to the Golden Retriever is, it is clever, well-behaved, and sensible.

The dog turned out to be a female and she followed the woman obediently. She did not resist being guided and did not hesitate to climb into the car.

The woman discovered that the dog had “sarcoma” on her butt, and she assumed that was the reason she was abandoned in the woods.

According to the doctor, if this golden retriever came for treatment earlier, the sarcoma would not have been worse and the cost of the medical services would not have been too much. But as her condition worsened, the woman would have to spend more than her available budget just to cure the Golden Retriever.

Seeing the dog lying there very weak, the woman did not hesitate. She paid out part of the expenses with her own money, some kind-hearted people donated some money too, and the hospital gave her some discount, saving the dog’s life.

Sometimes bad luck may follow one after another, but as long as you persevere, “pure luck” will also come.

From being rescued by a woman, to being treated well by a doctor, and someone coming for adoption, the Golden Retriever got out of loneliness and despair in just two days. The predicament was no longer visible on her features.

Some people love dogs, and some, otherwise. It is never the dog’s fault, although they get cruelly abandoned, but only the people who no longer love them, and sometimes leave them for dead.

The grouper that mimics a dog’s behavior when in presence of...