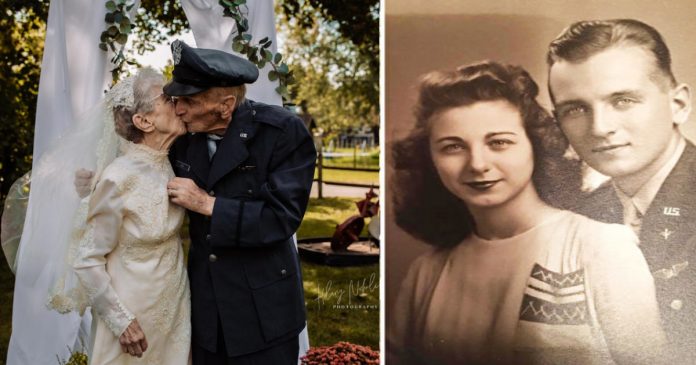 A hospice patient in Iowa, USA, walked down the aisle in a beautiful wedding dress for the first time on the 77th anniversary of their wedding, with the help of the staff.

A staff member of a hospice care facility in Iowa, USA, learned earlier that one of their patients will soon be celebrating her 77th Wedding Anniversary. Back in 1944, she didn’t have time to wear a wedding dress when she married her beloved, so they decided to give her a chance to walk down the aisle in a beautiful dress.

The 97-year-old bride, Frances “Frankie” King, is being cared for at the St. Croix Home Hospice. Her husband, former US Air Force pilot Royce King is 98-years-old. On September 24, the elderly couple celebrated their 77th wedding anniversary in their backyard.

“I helped my mother put on the wedding dress, and my father’s health assistant helped him put on his military uniform,” their 68-year-old daughter Susan “Sue” K. Bilodeau told The Epoch Times. “Hospice staff escorted dad to the yard. And then sat on the chair near the altar, waiting for his bride to come out. To give him a bigger surprise, we covered his eyes with a handkerchief.”

In September 1944, Royce took a short vacation while serving in Lawrenceville, Illinois. The newlyweds only had two days to prepare, and they held the wedding in haste.

As there was no time to buy a suitable wedding dress, Frankie was only wearing a long white dress. Only a few relatives and friends and some foreign guests attended their wedding. There was no photographer on the scene.

Therefore, when hospice workers heard stories about them, they decided to give them a surprise.

“Because of my parents’ funny personality and their love and loyalty for each other, the staff of St. Croix Family Hospice is deeply influenced by them,” Sue said. “They are ingenious and organized this very special ceremony for my parents.”

Sue said that when her parents learned of the plan made by the hospice staff for them, they were very excited.

77 years later, the couple even had the opportunity to take a lot of photos to record the happy moments of Royce when he saw the beaming bride in her wedding dress for the first time.

“This is a perfect retro dress from the 1940s. I got it from a relative of a hospice worker,” Sue said. “When we took off the handkerchief, Dad finally saw mom standing in a beautiful dress in front of him.”

On that day, Royce wore the uniform of the United States Air Force he wore when he got married. When he saw his wife in a beautiful wedding dress, his eyes were filled with love.

“He smiled and laughed for a long time,” Sue said.

Additionally, at the wedding venue, the music therapist at the hospice also played songs from the 1940s with his saxophone and guitar.

As a high school couple, Frankie and Royce shared a mutual love for bands, choirs, and church youth groups. After graduation, Frankie attended Cornell College in Mount Vernon, while Royce went to Iowa and then enlisted in the U.S. Air Force.

Soon, with the blessing of both their parents, Royce gave Frankie a diamond engagement ring.

In addition to Sue, the couple has a 71-year-old son, James, who has four grandchildren and seven great-grandchildren. They have lived together in their home in Oelwein for 68 years and have been active in their church and community.

Witnessing the long-term harmonious relationship between his parents, Sue said: “My parents are really special, not only because they have a very loyal bond with each other, but also because they are noble, honest, hardworking, and helpful.”

Modeling agency only accepts models over 45 to challenge the fashion...