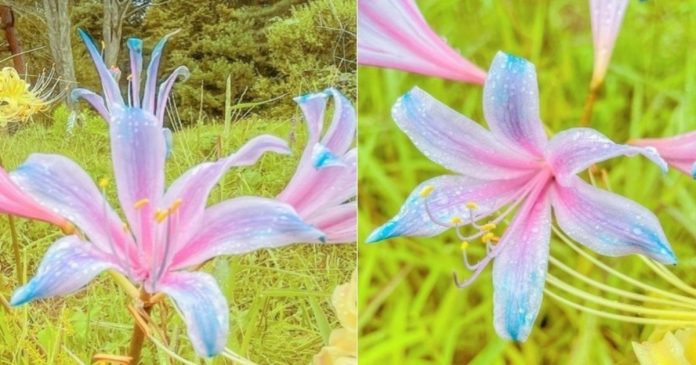 People from all walks of life admire all kinds of flowers, and they are certainly no strangers to the beautiful and dreamy shapes of the Higan flowers! Though some people seem to have seen other flowers in other colors besides the red, yellow, and white flowers that you usually see most often.

Recently, some Japanese netizens accidentally saw rare blue and pink colored flowers on the side of the road. Their beauty is so captivating that they look like they are flowers that can only be found in the fairy world. People can’t help but wonder…

In the photos shared by a Japanese netizen with Twitter account @soubi_rose, you can see that in a vast green garden, there are several flowers with pink and blue petals. The color gradually turns to blue, and the whole dazzling shape is similar to a bell. Most of these rare species are located in a large sea of ​​yellow flowers, which looks even more captivating!

Since the flowers are so beautiful that it looks too unreal, the photos immediately attracted attention and heated discussions among many netizens after they were uploaded on Twitter! Although the cause of the gradual color of the flower is not yet known, many netizens have also exposed the pink-blue colored flower that they have accidentally seen in other places, and some people even brought them home. Seeing these rare flowers bring the illusion of being in another dimension.

However, different Higan flowers have different flower languages, and their beautiful shapes always make people want to plant a pot of these rare flowers at home, but in fact, the rhizome of Higan flowers is poisonous. There is a good chance of vomiting, nausea, cramps, and spasms if these flowers are mixed with other food.

The colors of the flowers are really beautiful! It’s no wonder that even the popular anime, “Demon Slayer: Blade of the Demon” also uses the blue and pink colored flower in their show.