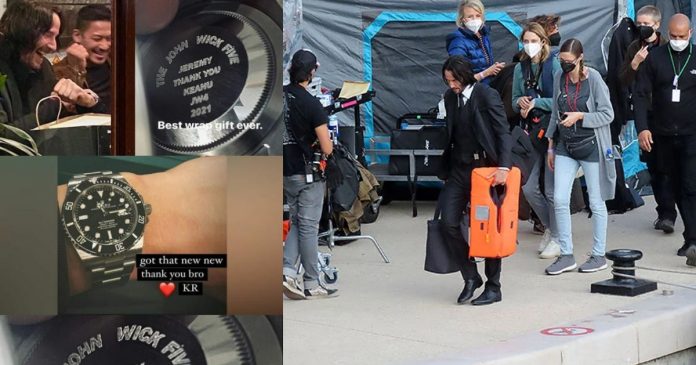 57-year-old famous Hollywood superstar Keanu Reeves, who became a global hit with the movie “The Matrix” and performed classic movies such as “The Devil’s Advocate” and “John Wick”, not only established the role, “king of action movies.” In addition to obtaining the status of being a “box office hit”, in the past years, Keanu Reeves has done numerous heart-warming deeds that touched the hearts of many people!

Keanu Reeves donates most of his earnings to charity. He didn’t even buy a sports car and still took the subway to commute. After filming “The Matrix,” he attributed his global popularity to the team behind the scenes, and generously distributed 90% of his pay to the staff, and even paid for brand new Harley motorcycles for each of the 12 stunt performers as a token of his appreciation.

Recently, Keanu once again made the headlines when he gave 5 luxury Rolex watches for himself and his four stunt members after filming “John Wick: Chapter 4”. Keanu cherished their camaraderie during filming and had high respect for them. He also enjoyed seeing all 5 of them wearing the same brand and make of Rolex Submariner watches.

However, Keanu Reeves not only gives material gifts to meaningful people in his life! Recently, in a report of the foreign media “dailyresearchplot”, he was seen assisting his colleagues during filming on the set, which completely surpassed his role as a superstar. After some photos and videos were shared on social media, they were immediately praised by netizens!

Recently, “John Wick: Chapter 4” was filming on location in Paris, France. However, while the crew and the superstar were busy preparing for filming, Keanu Reeves was quick in assisting the staff move some heavy equipment. A netizen who witnessed the incident shared a video on Twitter, showing Keanu assisting his crew carrying some of the equipment to be used on the set…

In the 16-second short film, Keanu Reeves was carrying a large backpack behind his back, carrying a box and a bag in his left and right hands. He walked slowly, carefully climbing every step of the stairs with ease. Later, a staff member signaled to take over, but he respectfully declined and insisted on moving along. This job is usually done by the staff behind the scenes, but this time Keanu took the initiative to help, so netizens who watched the video said, “Bless this kind-hearted man!”

This heart-warming gesture of Keanu helping out to carry equipment is not his first time. In the past, Keanu Reeves carried orange props and bags with his left and right hands, and mingled between the staff, even when he was wearing a suit for filming. He treated the staff as his family. Naturally, the famous celebrity is more loved by the outside world.

Keanu Reeves’ latest work “John Wick: Chapter 4” is expected to be released in 2022, but there have been so many heart-warming deeds that Keanu has done behind the scenes. Everyone is trying to imagine how exciting the movie would be when it is finished filming! It is not hard to realize how fans do love Keanu Reeves!

Keanu is so handsome, kind-hearted, and down-to-earth! After all, it is not every day you encounter a celebrity like Keanu Reeves! ❤️