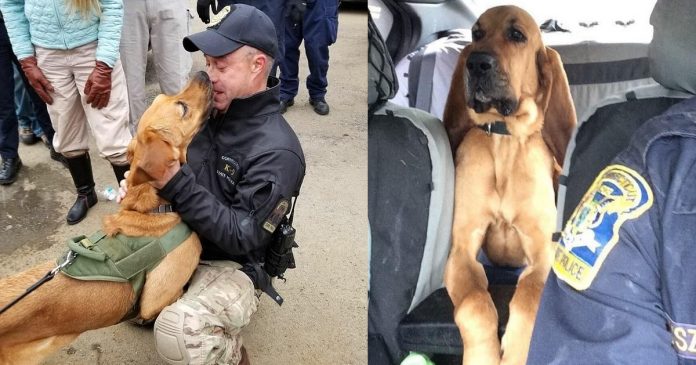 K9 dogs are very important to the Search-and-Rescue team. In 2018, a trained search-and-rescue dog in Connecticut, USA, went missing for 2 days. Hoping for proof of life, more than 100 police, firefighters, and citizens formed a search-and-rescue team to find the missing dog, and no one was willing to give up on the search.

After 36 hours of intense searching, the dog, whose name is Texas, a 3-year-old bloodhound, was finally found by Jeff Kehlenbach, an off-duty special agent with the U.S. Department of Homeland Security. Texas was hungry and thirsty, but was in good spirits, though all his paws were worn out.

A police spokesman said: “After the veterinarian, Dr. Brian Laubstein of Beacon Valley Animal Hospital in Naugatuck, checked and treated K9 Texas, it was confirmed that he was in good condition! To our law enforcement, fire, and EMS partners, thank you for not only showing up on-duty but volunteering your time off-duty, too.”

The Connecticut State Police Captain, who initiated the search-and-rescue operation for Texas, said: “He has saved many lives in the past operations. He is not only an ordinary dog, but he is also our team member! So many Nutmeggers stepped up and offered to help along with volunteers from New York, Rhode Island, Massachusetts, and several other states.”

Trooper First Class Ed Anuszewski and K9 Texas were on a mission in the woods along Danbury near Wooster Mountain on Wednesday night. They were tasked to search for a missing autistic man. The man was found safe, though K9 Texas accidentally separated from his partner during the search when Anuszewski lost his footing on a steep slope and fell. K9 Texas pulled strongly up the slope and continued tracking when he got up.

Then the search-and-rescue operation began. After 2 days, K9 Texas was found with his leash tangled up in a fence in the front yard of a Ridgefield house (no one was home). It was 6 miles from where he and his partner got separated. Upon his return, K9 Texas was given extra treats, some water, and lots of hugs from everyone!

Many people talked about the search-and-rescue operation done for K9 Texas, and many of them agreed that it was not a “cost-effective” mission. But when Texas was found and how happy Anuszewski and the team members were to have reunited with him, they realized how this dog is an essential member of their team, and everything is worth it!

This abandoned dog was in the freezing cold for 4 years,...