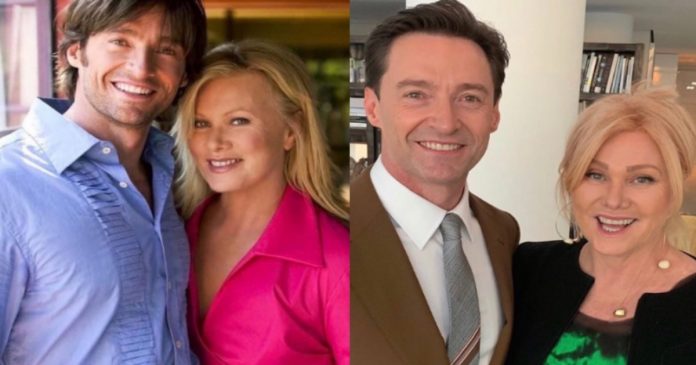 Hollywood superstar Hugh Jackman became popular for his role, Wolverine, in the heroic movie “X-Men”. He is not only known as a good actor but also as a “devoted husband”. His wife, Deborra-Lee Furness, is also an actress who is 13 years his senior.

Hugh Jackman has not heard any bad publicity about him in 21 years since his screen debut. Every year on his wedding anniversary, he would post emotional messages on social media and even create his own exclusive hashtag #mydebs. They are still in love after 25 years of marriage and have adopted two children. Always put the family first, and emphasized that “being a good father is more important than being an actor.”

It all started with love at first sight

The two first met in 1996 when they starred in the TV series, “Correlli”. At that time, Deborra was already a famous actress in Australia. Hugh Jackman generously admitted that he fell in love at first sight when he saw Deborra for the first time, and she was even shy for nearly a week. He didn’t say a word to her until a dinner get-together. Deborra broke the awkwardness and asked, “‘Why don’t you dare talk to me?’ I didn’t expect Hugh Jackman to confess directly: ‘I like you, but I will overcome it.'” Though, in just one and a half years, the two announced their marriage.

Falling in love before accomplishing it is the greatest blessing

Hugh Jackman loves Deborra so deeply not only because they are husband and wife, but for him, Deborra is also his most beloved predecessor in show business. He once said, “I am very grateful to meet her when I have not achieved anything. She makes me more aware of what will happen in this circle. She is my lucky star.” Deborra, who debuted earlier in showbusiness, understands the style of the industry better and can always give comfort and encouragement. Hugh Jackman sincerely believes that it is the greatest blessing to have fallen in love with Deborra before he became popular.

The domineering wife was once angry

Due to the age difference and Hugh Jackman’s soaring fame, the media used malicious words to attack Deborra several times, calling her unworthy of Hugh Jackman, but Hugh never wavered. Instead, he publicly declared in major programs: “My wife is a great woman, and I can’t find any reason not to love her.” Once, the media even doubted whether Hugh Jackman was gay, making him angry. “Are you asking if I’m gay? This question is out of line. It’s like I’m asking if you’re an old spinster.” the actor retorted, and all the words revealed how he loved his wife.

Deborra was 40-years-old when she got married. Being pregnant at her age, she experienced artificial insemination and two miscarriages. Hugh Jackman was very distressed. He couldn’t bear to see his wife continue to suffer. He offered to adopt a child and chose one with a different skin color. He emphasizes that “Deb and I only consider the needs of the child. How to teach the child is the most important thing. Skin color does not represent who you are.”

The two have been married for 25 years. Every year on their wedding anniversary, Jackman will flash up and confess his feelings warmly on Instagram, and even create his own wife tag #mydebs to save all the bits and pieces of the stories of the two.

Whenever he mentions his wife, Hugh Jackman always appears to be loving, ecstatic, and heart-throbbing like seeing his idol. To him, Deborra is his beloved predecessor, his loving wife, and even more so, his world.