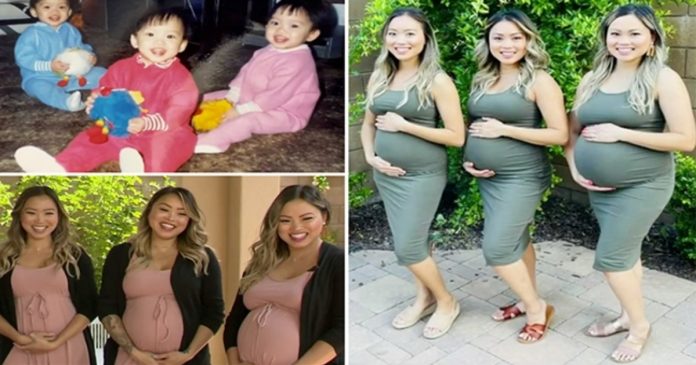 Those who are lucky enough to have a twin know that they can rely on them for the rest of their lives. Many people say that twins are one of the closest siblings ever.

This is the story of 3 sisters (triplets) who were born with a difference of four minutes, shared their life’s experiences, friendships, frustrations, and happiness. Gina, Nina, and Victoria, who will give birth together in the same year!

Gina, Nina, and Victoria have truly shared everything since they were born, and they probably never thought that they would one day share their experiences of motherhood, as well.

All three of them were pregnant at the same time – something neither of them expected, but it was undoubtedly news that filled their hearts with joy! The three share the progress of their pregnancy, with all the ups and downs that have come with it.

“It was so touching to share our food cravings and mood swings, how we were feeling, how tired we were and other things like that,” the triplets said. “And it’s great to have two best friends to share experiences with.”

The three were pregnant several months apart without any prior communication. Victoria already has a 2-year-old daughter and was born in early July. Nina, on the other hand, gave birth to her first child in late August, less than two months after Victoria. Gina, who already has two sons aged 8 and 5, will give birth to her third child, a girl, in November. At the end of the year, the three sisters will have their children born in the same year!

It was fun for them to photograph their baby tummy development:

A truly exemplary photo of how pregnancy progresses over the months!

None of the three had really expected such an experience, but now they say that they were very happy about it. Share this amazing story!

From janitor to educator, he strives for a better life. However,...