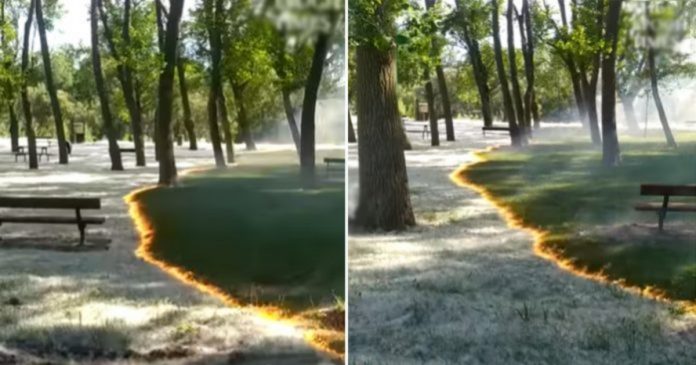 Many mysterious things are going on in this world that we may not be able to unravel, things that happen without knowing the cause. For all we know, it is already happening right before our eyes.

A wave of fire runs across the grass in a park in La Rioja, Spain.

Among the mysterious things that remain a mystery for many is how a strange fire can appear suddenly in a park in Spain.

The mysterious incident was recorded by a citizen who witnessed the event.

The bewildering video shows how the fire had spread by burning a layer of grass covered with white seeds that came from a poplar tree (a type of cotton tree) that was standing in the middle of the park.

The movement of the fire seemed like waves and what was more surprising was that the fire did not burn the trees or the wooden benches that were there.

Firefighters from the communities of Castilla and Leon later said they were sent to dump poplar seeds in the park of Cidacos, in Calhorra, La Rioja, northern Spain, where the incident took place.