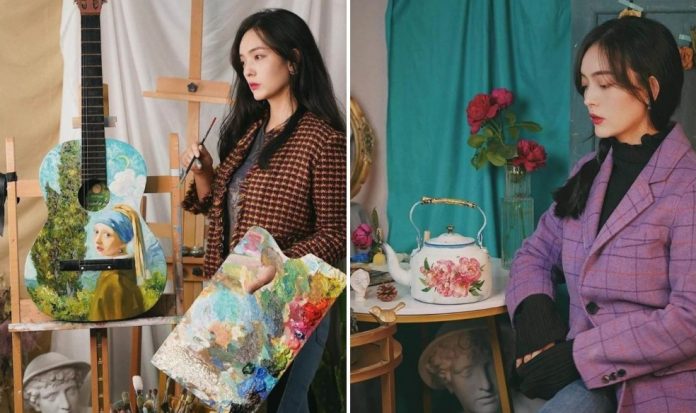 There are a lot of creative media in this era. In addition to oil painting on canvas in the past, lately, many ordinary objects can become unexpected masterpieces as long as new ideas are put into it, especially those objects that people find rubbish and have thrown away. The technique of turning discarded objects into brand-new artwork is amazing and anyone who looks at it is overwhelmed!

There is a saying that goes, “Some people’s trash is someone else’s treasure.” When it comes to turning rubbish into new art, a beautiful painter named Zhao Xiaoli in China has been very skillful with this. With her superb skills of turning trash into treasure, every piece of work that she has created has been shared online. The focus of everyone’s attention is that although she has not too popular, she is the only one with the skills that were shared on Instagram.

31-year-old Chinese painter Zhao Xiaoli has received a lot of attention on the internet. The reason is that a few years back, her creative media has been so-called “junk.” TV sets, discarded kites, and useless doors that are not needed by ordinary people have all become her inspiration to paint, and that some originally mottled objects turned into beautiful works of art in a matter of seconds. Netizens were stunned the minute they discovered her skills.

For instance, an abandoned guitar. Zhao Xiaoli came up with an idea and painted the cover of the book, “Girl with Pearl Earrings” on its front. The colorful details and the character imitation has been restored to their original charm. It has definitely become the focus of the netizens on her social media account.

Zhao Xiaoli found an old thermos and painted a cactus and butterflies on its body. From the original red color and rough body, she transformed it into a romantic ornament of nature, definitely a warm sight to see.

The seemingly dilapidated glass window has become a classical mural in the world of flowers after careful handling, especially where the flowers are painted in the originally broken glass. The outcome was three-dimensional, unlike the flat type of ordinary painting.

An old kettle is painted with green leaves and red roses, and it no longer looked antique. With its colors full of life and full of beauty, some people will want to sell it for a little money!

It’s not an exaggeration to describe Zhao Xiaoli’s works as turning rubbish into masterpieces. It’s worth mentioning that Zhao Xiaoli has very gifted hands, and she looks amazing standing beside her paintings. Her works are world-class and it will not be surprising if her paintings will be known around the world.

Zhao Xiaoli said: “Painting is my mission in life.” Perseverance and determination in picking up rubbish and transforming them with painting have made many people give her the impression that she is not only beautiful but gifted, too. If more of her works are produced in the future, many more netizens will be amazed too.

It’s so amazing… transforming ordinary objects into masterpieces! The first time I saw someone doing this…

Tying a Red Strap on Her Wrist for a Safe Return,...