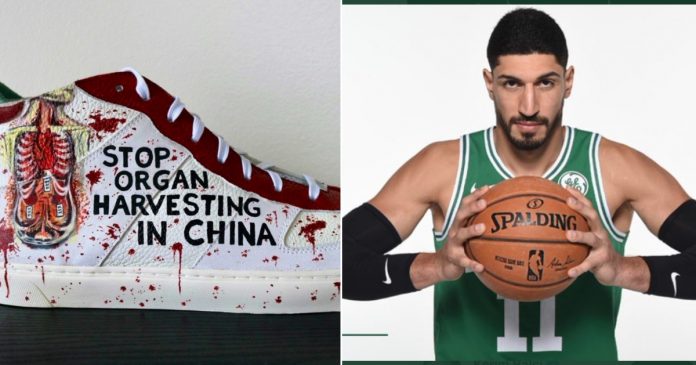 This is not the first time that concerned citizens have raised the issue of organ harvesting in China. However, similar concerns were raised by the U.N. with the Chinese Government in 2006 and 2007, without any, or any immediate response.

#13 Boston Celtics Center Enes Kanter slammed CCP (Chinese Communist Party) for their movement of harvesting organs from prisoners, which made the NBA player resort to social media and start a crusade against human rights abuses.

Enes’s posts on his social media accounts show photos of a customized shoe depicting a message to CCP. A doctor wearing a blue scrub suit is painted on the shoe, gripping an organ still dripping blood. A liver, kidney, and heart are also painted on the toe of the shoe; with each organ attached with a price tag. The sneaker is dotted all over with painted bloodstains.

“Stop organ harvesting in China.” This is the slogan painted on one side of the shoes in bold letters.

Since 2006, there have been detailed reports that have emerged coming from various citizens claiming that the regime has been harvesting organs from prisoners of conscience and selling them on the transplant market. Later the same year, whistleblowers also approached The Epoch Times confirming the illicit practice.

In 2019, the organ-harvesting allegations were confirmed after a year of investigation and were reported by a London-based people’s tribunal. They confirmed that Beijing has been engaging in forced harvesting of organs “on a significant scale” for so many years that continued until today. According to the tribunal, practitioners of the Falun Gong, a spiritual discipline brutally persecuted since 1999, were the main source of the harvest.

According to some medical experts who have learned of this practice, fear of economic retaliation caused the medical and international community to turn a blind eye to the abuses.

Weldon Gilcrease, a gastrointestinal specialist at the University of Utah, said that he tried to discuss the tribunal report with his university’s health care staff, but the leaders expressed hesitation, in fear that China may close their doors to the US and stop sending international students to their university.

“You definitely get support on an individual level, but when you try to raise that to the level of the institution, that’s where it gets deafeningly silent,” Gilcrease told The Epoch Times in September.

High-end corporations in America, Coca-Cola, Airbnb, Procter & Gamble, and Visa, major U.S. sponsors of the 2022 Beijing Olympics, were also reluctant in speaking out about China’s regime. They declined to say whether they would support moving the 2021 July Olympics to another location when they were pressed by U.S. lawmakers.

“As long as the governments are allowing the athletes to attend the games, we will be there to support and sponsor them,” Andrea Fairchild, senior vice president of global sponsorship strategy at Visa Inc., said at the congressional hearing.

NBA has suffered the regime’s wrath twice for the past two years regarding human rights.

In October 2019, the then-general manager of Houston Rockets posted a tweet supporting pro-democracy protests in Hong Kong, causing the NBA to lose major Chinese sponsors. Tencent, a State broadcaster CCTV and internet giant from China, had to go off-the-air tentatively though they had a five-year deal to stream NBA games. Tencent quietly resumed live-streaming shortly after, but the games of the Philadelphia 76ers, where former Houston Rockets manager Daryl Morey transferred to in November, were only broadcasted through texts and photo updates.

When Enes Kanter posted a two-minute video on Twitter slamming the regime’s abolishment of religious freedom in Tibet, his headstrong outspokenness had triggered another retaliation from China in October. Since then, live-streaming of the Boston Celtics games disappeared from Tencent.

The 29-year-old Boston Celtics center has had only some short playing time this season, which some fans suspected was connected to his activism. So far, he has only played 2 games averaging to five minutes of playing time for each game.

Kanter believes that such is the case. “Keep limiting me on the court, I will expose you off the court,” he wrote on Twitter two days earlier.

Kanter’s head coach Ime Udoka seems to imply otherwise. Pointing out Kanter’s weakness in defense, he argued that his decision to limit Kanter’s playing time is “strictly based on basketball.”

“We’ve got a lot of guys that are qualified and want to play, and they’re competitive so they’re getting antsy. You want to find the minutes, but other guys are playing well,” he said, according to Boston.com.

Udoka insisted that Kanter’s comments are “not really a distraction.”

“I don’t have social media. I’ve heard of some things, but guys have the right to express their views. And I’ve said that from Day 1. Nothing basketball-related will be based on any of that.”

There are supporters on Enes Kanter’s side, and there are others who oppose his fight for human rights. In any case, the photos of the shoes he posted on all his social media pages depict the exact message he wanted to convey.