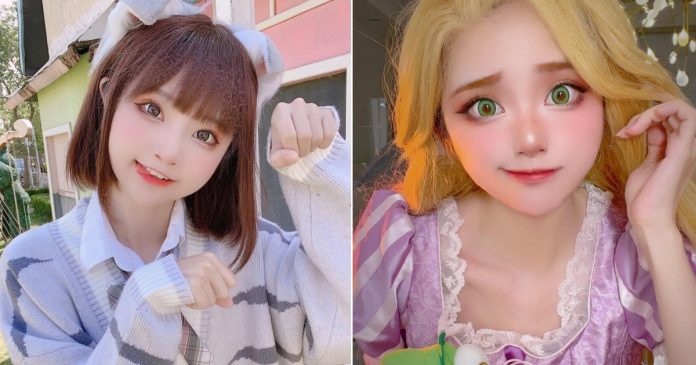 Everyone knows that make-up can do wonders for our looks. It only takes half an hour to make girls’ skin better, eyes bigger, and even the bridge of the nose, or eyelashes can be enhanced to give a full look! Many Cosplayers will also use make-up technology to imitate the characters in animé cartoons, and the similarity is amazing!

Well-known [email protected]小柔seeU is a master of character imitation using make-up. She looks like a child with her youthful and cute appearance, but Xiaorou is already a mother, and her husband Xiaobai is also a well-known Coser (short for Cosplayer), and the two often coordinate. Their works amaze netizens!

Most Cosers will choose two-dimensional animé characters when imitating their looks because three-dimensional cartoons in Europe and the United States are relatively difficult, but Xiaorou’s super make-up skills can imitate various styles. For example, Judy the rabbit in “Zootopia”, this group of photos has made her popular in Japan!

Ice Queen Elsa in Frozen is also imitated by Xiaorou. She succeeded in making up the big round eyes that characters in Disney animation have. She really looks like a cartoon character that came to life!

Princess Anna’s crooked mouth was done well when she smiled! Sure it’s not filtered?

The big round eyes and small red-colored lips perfectly imitate the charm of Princess Jasmine!

Xiaorou’s Rapunzel can also be recognized. It is the princess herself!!

Her version of the Demon Slayer series 😆 is unbelievably amazing, whether the character is scared or holding a sword.

It seems quite a bit difficult for a cute girl to imitate Monkey D. Luffy from the One Piece series. His eyes are really too big! 😆

Additionally, netizens also found out that she had previously introduced herself as “born in 1989” on the Internet, which means that she is 32-years-old this year. Such a youthful appearance said that she was 18-years-old and people also believed it. Her photos of pretend characters are also super charming, her eyes are so big and really beautiful.

▼Let’s take a look at Xiaorou’s video clip imitating Princess Rapunzel! If there is a princess in this real world, she must look like this~

Not only is she cute, but her make-up skills are also superb! Which of Xiaorou’s animé photos did you like the most?