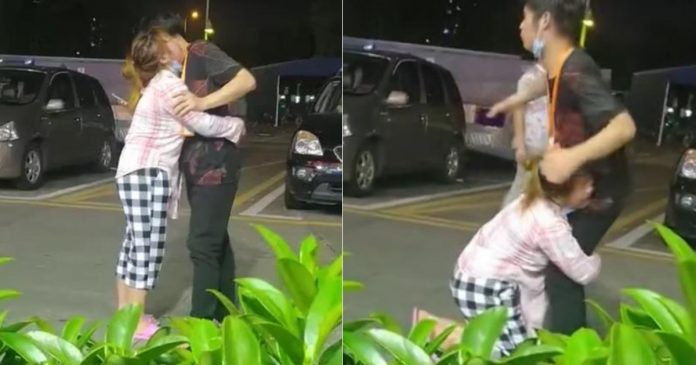 Marriage is a major event in everyone’s life, but before we are ready to step into marriage, there is still that major difficulty in asking the parents’ permission. Recently, a couple was seen crying in a parking lot in Shenzhen, Guangdong, China.

The two assumed they had to break up because the boy’s family couldn’t agree on the marriage offer. The woman cried and begged for the boy not to leave, hoping that the two could still find a way to tide over the difficulties together. The man said that he was powerless and the two could no longer be together.

▼The scene of this couple breaking up is very sad. The young woman was hugging her boyfriend and crying, begging him not to leave her. She frequently yelled, “Don’t leave me!” and “Please don’t leave, can your family think of a way out of this?” It turned out that she and her boyfriend have reached the stage of discussing marriage, but her parents said that if they wanted to get married, the man must provide US $46,850.00 (about 300,000 Chinese yuan) as a dowry price before they agree to their daughter’s marriage.

▼The couple came from abroad to Shenzhen for work. They have been in love for more than 2 years, but because of poor economic conditions, they had no savings, no car, or house. The woman’s parents disagreed with the marriage of the two and asked the man to provide US $46,850.00 for the bride price, but the man’s family really couldn’t afford the dowry, so they had no choice but to separate.

The woman does not want to break up with her boyfriend, but she also does not want to go against the wishes of her parents either. She asks her boyfriend to discuss with her family again, or simply borrow money to tide over the difficulties. The boy said that he didn’t want to trouble his parents because of their own affairs. He burst into tears and reluctantly broke up, saying, “Please let me go, my parents are already suffering.”

In the face of cruel reality, the relationship of this couple can only end here. 😢