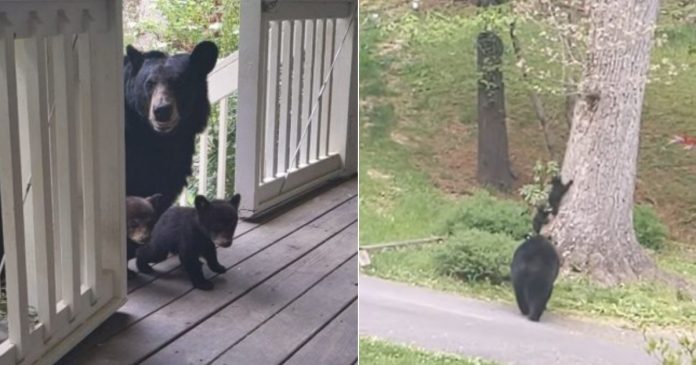 Animals are very grateful to those who have helped them and given them some love. For this reason, although the years go by very fast, they do not forget those good moments that were shared.

This has been confirmed by a man in Asheville, North Carolina (United States), after his large furry friend surprised him years later on a visit to introduce him to her beautiful babies.

The point is, we are not talking about a common animal, but an adult grizzly bear and her cubs. For this reason, the visit could not go unnoticed and was recorded on a video camera that has gone viral.

In 2017, Patrick Conley made a curious and tender friendship with a bear whom he decided to christen as Simone.

They met in the summer, a common time for bears to go exploring in the gardens around the forest, but the incident dragged on for longer than expected.

Simone used to go to Patrick’s house quite often, so the good man was encouraged to leave some snacks in his garage so that the beautiful bear would know that she was welcome there.

Within the span of their friendship, there have been times when the bear disappears and does not visit, until months later, and this year had been one of those moments of silence in this friendship. However, the beautiful Simone surprised Patrick with an unexpected visit in which she did not show up alone.

It turns out that the bear arrived with her two cubs and Patrick was so moved that he decided to record that particular visit.

At the beginning of the video, the little ones are seen to be somewhat shy but Mom encourages them to get out of the bushes.

Patrick was flattered by the visit and decided to shoot from a safe place. Without a doubt, the bear family managed to steal this man’s heart.

“Grizzly cubs are the cutest things to ever walk in this forest,” Patrick wrote in the video description.

They are a little more than 6 minutes of family tenderness that this mother bear allowed us to contemplate very close.

We do not know if Patrick will welcome these cubs in the same way when they are no longer little and look just as big as their mother. Having three colossal bears on your front porch may not be so much fun; however, this resident will enjoy his unique friendship as long as he remains safe.

This man has lived a once-in-a-lifetime experience that moved him by the tender gesture of this mother, he shared the video that shows us animals know how to love and be fully grateful.