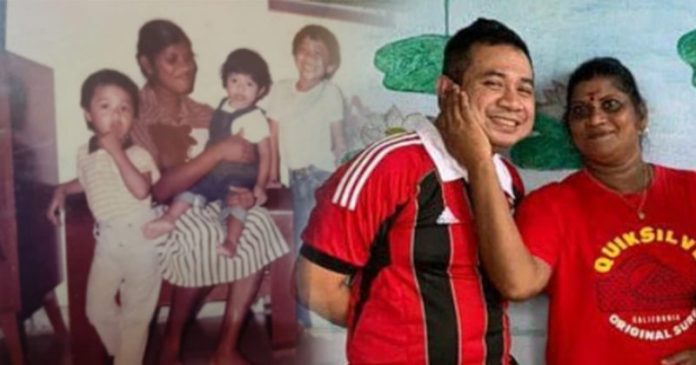 Even as adults, we do not easily believe some stories from friends or families wherein they used to live in a home with mixed races without feeling prejudice. If you lived in a mixed-race home but ignored each other’s differences, just simply saying that you are Malaysians, then most people will probably believe more of that story.

Facebook user, Dell Zhafry Fuad, shared his story about his relationship with Kak Mala, his former beloved nanny, and how emotional their reunion has become after 32 years of being apart.

Zhafry grew up in Berjuntai Tin Dredging, Selangor in around 1988, and Kak Mala, then 14-years-old, took good care of him, his two other siblings, and her sisters. She cared for them like they were her own children.

Zhafry recalled that Kak Mala had to sacrifice her own studies in school for the sake of her siblings. Nevertheless, Kak Mala looked after them while emotionally saying repeatedly that they were all like her own children.

Then, a sad moment arrived when Zhafry had to move to Terengganu and that was the last time he and his siblings saw Kak Mala.

Come November 2020, after 32 years, Zhafry and his childhood friend happened to walk down memory lane at Camp 6 Berjuntai to visit their Quran teacher, Uncle Khalid.

After meeting Uncle Khalid, they were told that Kak Mala lived nearby, and they were taken to her house. When they arrived at her home, Kak Mala was still out.

But thankfully Kak Mala’s sisters still remembered Zhafry and they immediately called her. They told Zhafry and his friend to wait for 20 minutes because Kak Mala was already on her way home.

In the unexpected reunion, Kak Malaka was unable to believe her eyes when she saw an adult Zhafry standing in front of her. She could not help that tears started to flow in the emotional moment.

“She held my hand, hugged, and kissed my cheek while crying. She said, ‘Thank God, my son was back’,” Zhafry said.

Kak Mala and Zhafry had a long conversation, catching up on all the years they were apart, saying that she married in 2018 and cared for her sick mother and brother before her marriage. Unfortunately, Kak Mala’s much-loved mother, whom Zhafry calls a Paati or Grandmother in Tamil, has died in 2009.

Zhafry said the racial differences between his family and Kak Mala’s were never a hindrance to them. For them, they were all one big happy family.

During Zhafry’s childhood days, Kak Mala looked after him and his siblings while their parents were away or attended an important ceremony. If their parents returned home late, they would pick-up Zhafry and his siblings from Kak Mala’s home. Zhafry sincerely said, at that time, everyone was living peacefully and no differences.

From the beginning, up to the reunion, Zhafry hoped this would be the beginning of a long-term relationship between his family and Kak Mala’s family. And that’s what we all hope and pray for, too.

Though most people cannot accept co-existing with people of other races, this is a factor that we all should try to consider since we all are just the same human beings living on the same planet.