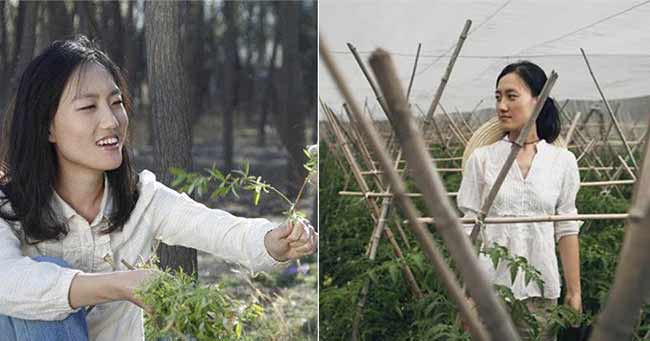 Shi Yan was born in Baoding City, Hebei Province, China. Her parents were employees of a state-owned company. She’s been amazing since she was little. In 2006, she was accepted at Renmin University of China for a doctorate in rural development and later accepted at Tsinghua University for a postdoctoral degree.

After graduating from Tsinghua University, she became the first student to go to the United States to work in agriculture at public expense.

She found that compared to farmers in her country, the work of American farmers was very relaxed, but their output and production capacity far exceeded those of farmers in China.

One year of study has allowed Shi Yan to change her views on agriculture and also devised a series of plans suitable for conditions in China.

After returning to her country, Shi Yan was unable to rest and immediately set out to build her experimental base and carry out her plans.

After days of traveling, she finally found a countryside in the mountains and cooperated with the local farmers.

Shi Yan gave them the seeds she cultivated through her research, and local farmers planted them on their own land.

The farmers who depended on the farmland for food didn’t believe her at first, and no one wanted to cooperate with her, so she moved to the village, worked with the farmers every day, and used her skills to solve their problems in farming.

After all, she is a Ph.D. graduate from Tsinghua University. Gradually, some farmers believed her and agreed to try to work together.

It’s not that the students have never been to the village, but they only talk theory, and they only stand on the edge of the rice fields, which makes the villagers very doubtful.

But Shi Yan was different. Even though she was a girl from the city, she jumped right in and worked with the villagers, and she did a great job.

Soon, the first crop from the experimental field was harvested, and the result was much better than the ordinary seeds, and the color was even better. The villagers rushed to cooperate with Shi Yan.

After 11 years of hard work, Shi Yan’s CSA farming model has spread throughout the country and has been recognized by many. Now, its annual income has exceeded US $1.2 million.

Shi Yan was also named the “National Youth Leader” for her achievements.

In 11 years, Shi Yan devoted herself to the countryside bringing benefits to millions of farmers across the country.

But now, that gentle and beautiful girl has become a dark-skinned country girl.

Since she rarely came home, her parents went to the countryside to visit when they miss her.

After they arrived at the village, and they were only a few meters away, her parents did not recognize their daughter.

Although, there was pride in her parents’ tears.

Shi Yan, on bare feet, stepped away from the usual city life and came out on a different life.

Only with modern management can all farmers work effectively and no longer have to endure difficult days.

Shi Yan recommends organic planting so that there is no more use of chemical fertilizers, and the land can be returned to its original state, leaving pure soil for posterity!