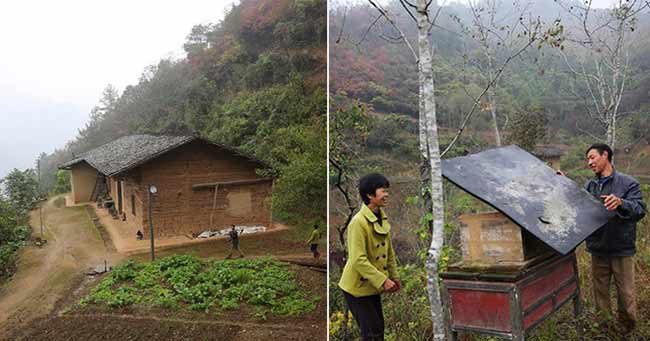 In Anping Village, Shaanxi Province, China, in a deep ravine called Taoyuan, an inseparable husband and wife walk hand in hand. The couple is the only inhabitants of this valley deep in the mountains, where the place is fertile, the air fresh, and secluded.

Wang Xinming, 51, is an industrious and hard-working person. His wife is gentle and virtuous, simple and kind, and could bear hardship and endure hard work.

The couple had not left their home in the middle of the mountain since their marriage.

They say that people can live, as long as they work hard, and their income in the mountains is also very impressive.

The couple’s two sons work elsewhere, and they rarely have time to return home.

The mountains are rich in produce, and the couple mainly relies on growing chestnuts, konjac, and gastrodia elata and raising bees for their livelihoods.

They own 130 hectares of chestnut gardens, plant 2 hectares of konjac, more than 500 square meters of gastrodia, and raise 20 to 30 bee boxes.

Among them, large chestnuts grown more than 20 years ago are their main source of income.

After one year of hard work, they were able to earn 100,000 yuan (approx. USD14k) in which case, the couple was already satisfied.

In front of and behind the couple’s house, apart from growing green vegetables, they also plant black mushrooms which are nutritious and delicious.

Some black mushrooms can be stored for self-consumption and the rest will be sold to supplement household needs.

The good news is, the mountains have long been connected to electricity. Thanks to TV, the couple’s life at night is no longer quiet, no longer lonely. Since they watch TV most of the time, the couple felt that even though they lived in the mountains, they are no longer left out of information, and they could also appreciate the beauty of the outside world.

The couple raised twenty to thirty bee boxes, and the method of maintenance is the same as the original method passed down from the ancestors.

Making full use of the resources in the mountains has paved the way to get rich, and raising bees according to local conditions, made the couple’s life sweeter and more comfortable.

Breathing fresh air every day, eating natural and pollution-free food and vegetables, drinking clear and fresh spring water, Wang Xinming and his wife said that they have long been accustomed to this kind of free and independent life, and they don’t want to leave this life behind.

In their spare time, the couple also goes together to find wild vegetables and pick wild fruits to eat.

The winding path to the foot of the mountain was gradually widened by the couple. Initially, it was a small path, which only one person could pass. Finally, motorbikes can pass, too.

Sometime in the future, the road will continue to be widened, and also used for agricultural vehicles. Trucks can finally drive on it. In this way, the produce from the mountains could easily be sent down to thousands of households.

Only the mountains are the only witnesses of the couple’s hard work and perseverance through the years!

The couple has been living in the mountains on a place with a deep ravine, far from neighbors for decades! Someone asked Wang Xinming and his wife, didn’t they feel lonely for so many years?

They say nonchalantly that they are never lonely and they got used to it! Yes, no parties, no trickery, no hassle, no temptation to compare, no smog pollution, and only pure skies, green hills, and purely natural food and drinking water.

What a joy it is to live a lifetime in such an environment in isolation!