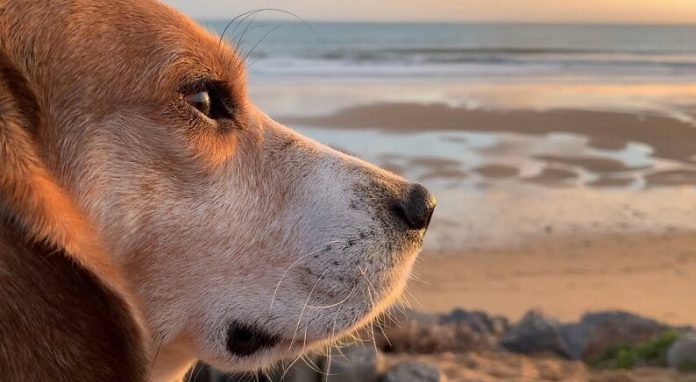 The moment a puppy, who lived as an experimental dog in a pharmaceutical company’s laboratory without seeing the outside world three years, saw the sea for the first time in his life, he stared at the ocean for a long time without uttering a sound.

Last month, a video was uploaded on YouTube with the title, “One Year After Adoption of Experimental Beagle,” which moved many netizens.

The YouTuber who uploaded the video adopted a beagle puppy that finished its mission as a test dog last summer. He named him ‘Julius’.

Julius was a laboratory dog ​​for a pharmaceutical company. He had to endure three years in the lab without knowing what the pain was for.

What kind of thoughts did Julius have in the past three years, when there was no wind and no sunlight?

On the first day of his adoption, Julius was aimlessly running around with his tail drooping, startled by the smallest thing. He couldn’t even go down and up the stairs.

While he was eating, the new owner noticed that he couldn’t even eat his meals properly.

On the second day of his adoption, Julius began to wag his tail little by little.

What he liked the most was that he was out of the lab. He lay comfortably on his pillow and was hair-brushed.

He also loved meeting children he had never seen before when he was still in the lab.

Julius, while still in the lab, would go for walks but only inside the vicinity and never outside the building.

A sudden change occurred when Julius, who lived in a place where no one could resist staying, met someone who loved him and was willing to take him home.

The YouTuber went hiking with him and went to see the beach.

He looked at the sea at sunset, a place where he went for the first time in his life.

Julius was exposed to the sun, smelled, felt the wind, loved, and came to know a different world.

He also welcomed Christmas and the New Year, twelve months of the four seasons of the year passed, and one day, summer came again.

The YouTuber concluded the video by saying, “The experimental dog was just an ordinary puppy. I hope the rest of Julius’s life is happy.”