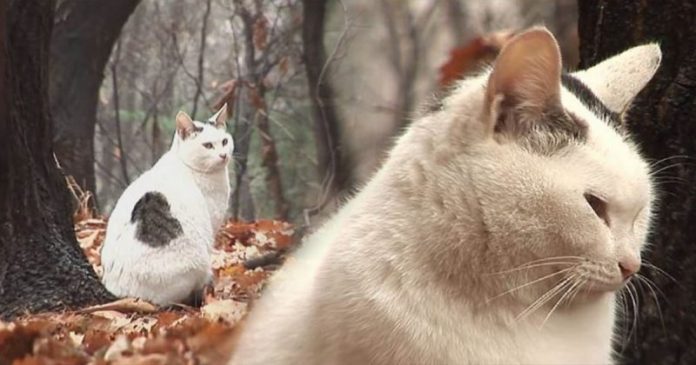 People sometimes have the wrong impression when it comes to cats. For non-cat lovers, these animals built a bad reputation for often refusing to be approached by humans and are fond of being alone.

However, experts have proved the opposite, where cats are actually just like dogs that have an emotional bond with a loved one.

This is Prophet, a cute fat cat that is white with black spots. Prophet is also known to love following his master up the mountain.

His master did not have the habit to tie him up with a leash. Prophet is free to follow his master wherever he goes.

At first, Prophet only followed in the footsteps of his master, just like a small child who cannot be separated from his parents.

Yet, there was a time when Prophet inadvertently strayed from his master and realized that he was lost. His master is completely gone!

Prophet then returned to the last location where his master used to rest but was disappointed when he was not there, either. Finally, Prophet wandered alone, looking for him.

Many visitors felt sorry for Prophet and often left food and water for him until he gained more weight than before.

Prophet was a bit spoiled. He allowed people to pet him, but the cat refused to be picked up for fear of being taken away.

Yes, Prophet remained faithful, waiting for his master to return and to invite him home. However, to no avail.

Two months later, an animal-loving individual appeared and brought Prophet home even though the cat was unwilling. He was also taken to a veterinary clinic for examination.

Fortunately, some people sympathized and gave him food and drink while he was there.

Thankfully, the results of the examination showed that the Prophet was in good condition and healthy. May Prophet live happily with his new master and a new home.