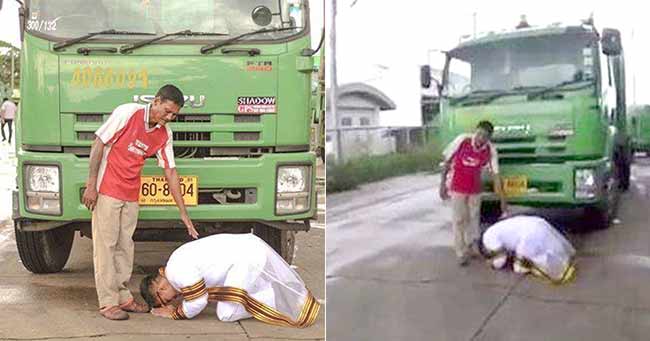 Perhaps in the eyes of most people, getting a bachelor’s degree makes you respectable. However, for Klanarong Srisakul, a young man in Thailand, all of that is very extraordinary because it was not easy getting a degree as such!

It turned out that Klanarong’s father had been working as a garbage truck driver to pay for his college education. Therefore, on his graduation day, he was very proud of his father, who had worked hard and made his son able to get his bachelor’s degree. He bowed in front of his father as well as the garbage truck and thanked him for all his services.

Klanarong once complained about his father when he was a child, thinking that the job as a garbage truck driver was a disgrace. He compared the fathers of his other classmates, who had careers in the military and police.

As he grew older, he only realized that his father’s family was poor when he was a child. His father had many brothers. He could not go to high school because he had to help his parents work in the fields.

Even though life is very difficult, he never let his son suffer. Whatever Klanarong wants, his father always grants it.

His father never asked Klanarong to help with housework. He just wanted him to focus on studying. For that, his father did not have any heavy feelings for his work.

Klanarong also thought about entering the military academy but failed because he didn’t pass the exam. He became frustrated, but he always had the support of his family.

On the day of Klanarong’s graduation, his father was so moved and cried with joy. It all seemed worth it. He was also very happy that his son did not suffer because of his family’s circumstances.

We have to look back and think, did our parents do much for us? Remember to express your gratitude and love, have no regrets, and show it boldly!