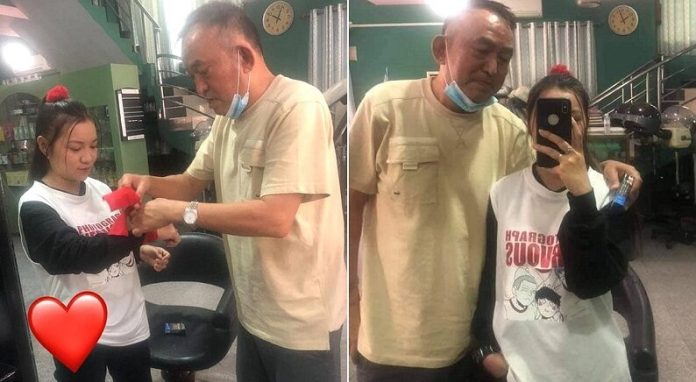 It was one of the happiest moments shared by a father and his daughter, a selfie taken together. Although, unknowing to them that it would be the last photo they would take together. The father tied a red band on his daughter’s wrist for a safe return. Sadly, she never came back.

The photos were shared on Facebook 3 days after the incident has happened by a citizen from Myanmar who knew the daughter, Ma Kyal Sin, known as Angel, and her father who stays at home.

In the photo, her dad ties a red string to his young daughter’s wrist. Jimjit looks calm, but he’s full of worry.

Angel, a dancer, and Tae Kwon Do champion stood in front of the mirror with her dad and took a picture.

That was the last.

The day she took a photo with her Dad, was the same day she participated in a protest.

Earlier, a military coup broke out in Mandalay, Myanmar. With democracy at a war with the people, citizens have taken to the streets to protest against the coup.

The military, which triggered the coup, opened fire to disperse the protesters, causing deaths throughout Myanmar. Angel, who was wearing a black t-shirt with the slogan, “Everything will be OK”, was shot in the head. It was the bloodiest protest in Myanmar to date.

Before attending the protest, Angel was said to have asked for her organs to be donated to the needy if she passes away, leaving a message on social media with details of her blood type.

Her father must have had the feeling she may not come back from the protest, so he tied a red band on her wrist for a safe return, and took a selfie together with Angel, which appeared to be the last one.

Although, she died from the military shooting, Angel took a stand at the vanguard and fought alongside of them.

We sincerely wish for the blessing of all who perished, and peace to come to Myanmar.