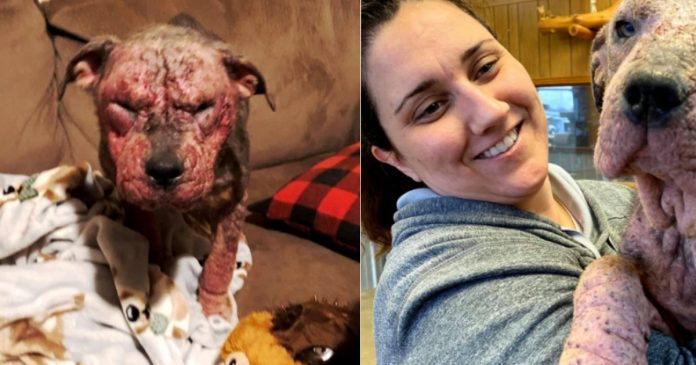 There are no doubts that there are angels on earth, we just have to open our eyes and look around. Once we spot these beings, the whole world will truly be different from now. One of those angels sent to earth is Lauren Buckley from Alabama, USA.

Lauren and her partner, Brook Cole, welcomed the arrival of Brooks, a puppy rescued from being euthanized. Since then, they promised to keep helping dogs since they were certain that there are so many little animals out there with an uncertain future, begging to be helped. For four years, and still counting, they have totally dedicated themselves to healing terrible physical wounds of distressed animals for four years now, but above all healing their broken hearts.

One Christmas Eve, they set out and rescued a puppy that the Brown Dog Coalition was trying to save and needed urgent help. A poor puppy was rescued from a ditch where it was stranded and found in the most shocking conditions.

The poor dog was in such bad shape that Lauren was really afraid she would succumb to her infections before they could take her to a vet. The dog’s name is Lainey.

“She lowered her embarrassed little head, looked like an alien creature, sucked, couldn’t see, lost all her fur, and bled all over the couch. We held our breath for the next 36 hours…,” Lauren recounted once it was in her rescue.

Luckily, Lainey’s wounds were not serious enough, and they were still able to save his life. He was diagnosed with demodectic scabies and secondary skin infections, was given antibiotics and ivermectin to fight the infections and mites that infested his painful skin.

His medical treatments were a top priority, otherwise Lainey would not survive.

For days and nights, Lauren gave all her dedication and love to Lainey’s well-being together with the vet’s selfless care.

As the days have passed and miracles have started to do their wonders, she began to heal, and her fur began to grow again.

More days have passed, and Lainey started to heal some more. Before they knew it, she was starting to become unrecognizable. Her bleeding skin that used to take up most of her body soon started to have beautiful brown fur.

Lainey spent 4 months under the strictest care, full of antibiotics, receiving coconut oil baths, and other medicinal baths, and they have to ensure she was not stressed and that all her wounds and scabies completely healed.

Lainey was safe and was no longer just another dog on the outside. She had a temporary home, and she could no longer be ashamed of her appearance or worry because she stained the couch with her bleeding wounds. That was all a thing of the past.

Luckily for Lainey, at the right time, one of Lauren’s good friends, Kelly from Georgia, contacted her and showing interest in adopting Lainey because she wanted to give her the home she always deserved.

“It feels like a full circle. She and her husband are amazing and kind people who fell in love with Lainey from the first moment. We couldn’t have asked for a better family for her,” Lauren said.

“We would do it all over again, because today we can send a beautiful, brave, sweet and healthy dog who has nothing but wonderful things saved for her,” Lauren added of her rescue work.

In one last post, she shared her joy in handing Lainey over to her new parents.

“Today is the day! After spending the last four months together, Lainey heads home forever,” she wrote.

If this story touched your hearts, please do not hesitate to share it on all the networks and platforms. Every animal, big or small has every right to live, and they deserve a second chance. They deserve to live and deserve to be loved. It is so amazing how miracles work on these wonders in our daily lives.