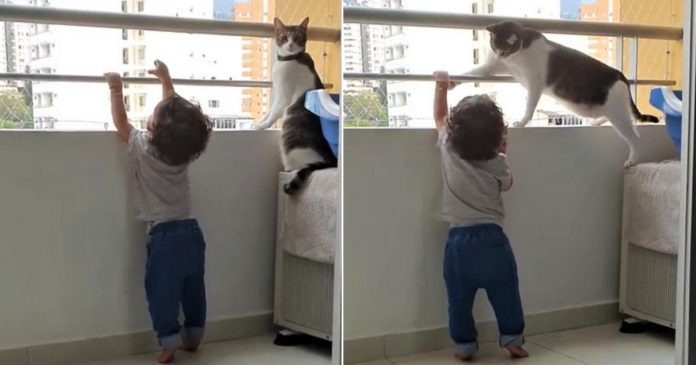 Cats may usually be very cold-hearted but are very patient when being with children, and they will also take the initiative to protect them. Abroad, there is a cat who saw his human brother trying to climb the railing of the balcony and hurriedly ran over to stop him. The younger brother stretched out his hand to grab the railing many times, but the cat eagerly stops him. Not only did he stretch out his paw to stop the child, but he also turned his head to warn his owner: “Come and take care of him!”

▼The family lives in Bucaramanga, Colombia. The younger brother has just learned to walk and stumbles around at home all day. He was curious about the scenery outside the window and wanted to climb the railing of the balcony to have a look. Parents have installed protective nets outside the balcony, and they are assured that the infant can’t climb up the railings due to his height and strength, but the cat is still worried.

▼The younger (human) brother excitedly raised his hands many times and wanted to grab the railing. The cat reached out his hand to stop him. He also glared at the parent as though to remind him to take the child inside. Although, the parent did not move. The cat instead reached out for his brother’s hand that touched the railing, as if saying, “Don’t climb up, it’s dangerous!”

After seeing the video, various netizens remarked: “The baby is also very smart, knowing that the cat is correcting him.”

“The cat wants to stop the child, but it didn’t hurt him. It’s really great!”

“The cat must love the little boy!”

“I like the moment when the cat looks back (stare?) at the owner, it cares about the child seriously.”

The feline brother is very responsible, he works hard to protect his brother. Very heart-warming!