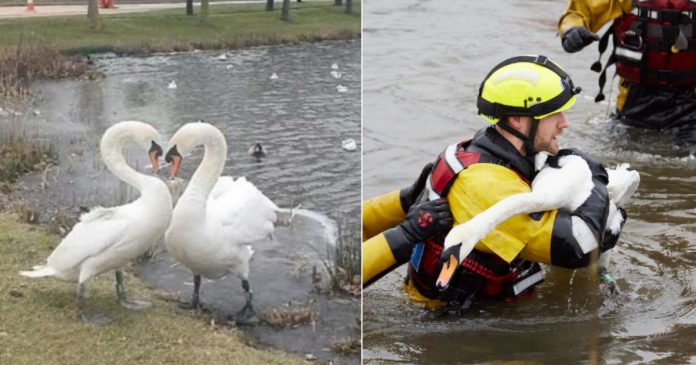 It was the loveliest sight to see!

Swans are very beautiful and lovely creatures. Hopefully, also humans feel free to show the same love and compassion towards one another…

There are only a few species of wild animals who usually live with their partners forever, and one of them is a swan. When they are together, these majestic birds express their feelings freely just as humans do. So no matter what the reason is when they get separated, they feel heartbroken, too. This is a story of 2 swans who were reunited after a short span of separation.

The swans, named Bonnie and Clyde, live in a nearby lake not far from the city of Crewe in England for several years now. They became famous not just by wildlife enthusiasts, but even by locals and everyone knows them as local celebrity birds. Recently, Bonnie was injured and this worried everyone. Concerned citizens called the Royal Society for the Prevention of Cruelty to Animals (RSPCA) and rescue teams responded immediately. Apparently, rescuing Bonnie proved to be tougher than expected.

While being rescued, Bonnie was quite feisty and was resisting, so it took 4 members of the water rescue team to bring her to safety using 2 rescue rafts.

The female swan was immediately brought to the RSPCA facility, where the vets discovered that Bonnie had a leg injury. Although not too serious, they said she would be fine very soon. Luckily, Bonnie recovered in less than a month and the volunteers were able to reunite her with her soulmate, Clyde.

When she was finally released, she immediately bounded towards Clyde, and unexpectedly, the pair made a heart shape with their long necks which were captured in a photo.

It was the loveliest moment, a heart-warming scene, meant for everyone to remember how delicate and compassionate these birds are.

The love they share is very precious. Very sweet! ❤️

Two beautiful birds reunited and so happy to be together again. These majestic birds are known as The Sacred Birds. 🦢❤️🦢❤️