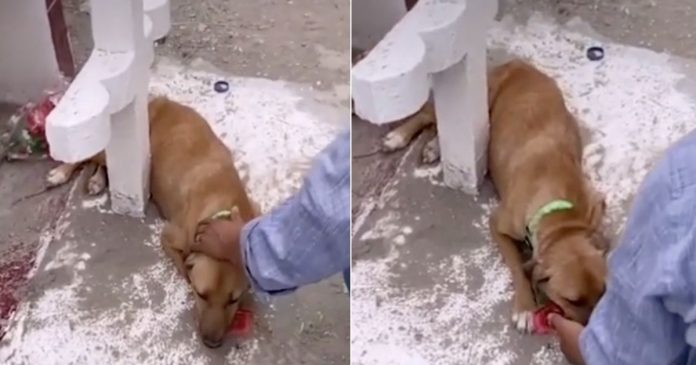 It is said that LOVE lasts even beyond death. When loved ones depart from this life, it does not mean that their memory is gone from the minds and hearts of those who love them. However, one particular incident happened when it was discovered that the one who missed its human father is his one and only precious pet dog.

Through her account on TikTok, a woman shared what could be the most heartbreaking video, so far.

The sad puppy arrived at a cemetery and heads straight to the grave where his deceased owner is buried. Surprisingly, the dog is not mistaken, and when he arrived at his resting place, he mourned the departure of his human father.

Apparently, the puppy is currently living in a shelter but escaped to visit his former owner, who lost his life a few months ago. The video was unclear on how the human passed, but it became known that he was a victim of the COVID-19 Pandemic.

“The pandemic has left countless pets without a family. Your owner is here, right here,” you can read and listen to it in the short video.

In the video, you will see the puppy lying over its owner’s grave, with his heart shattered and missing his owner very much.

If it is difficult for humans to accept the departure of a loved one, it is worse for a loyal pet who was taken care of by his human parents for so many years.

Who can explain to them that they have not been abandoned, but were left behind by their owner’s passing?

Like this little puppy, some pets fail to recover from the passing of their human parents and often visit their graves, such as a desolate kitten in China who spends her days staying at the burial site of her human father.

The bond and loyalty that some animals have with their owners are unconditional, and for them, there is nothing that matters more than the love and care they receive.

Whether dogs, cats, horses, birds, or lizards, animals have the power to respond with much gratitude to those who have loved them. If you have taken care of a pet for quite some time, they will give you their loyalty until you pass, as long as you never abandon them.

The images of this puppy are very emotional and reflect his great loyalty, share his story and send him your blessings and good wishes.