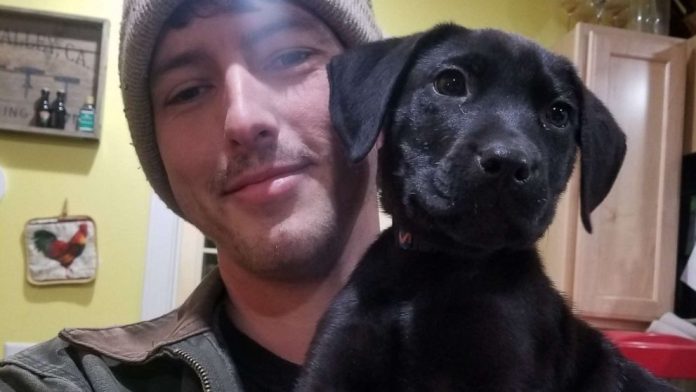 Though we are unable to put an exact date to the moment men and dogs fostered an inseparable bond, it is undeniable that they share a special relationship that transcends over time.

Unfortunately, humans can be biased at times when it comes to choosing their furry best friends. Most of them tend to go for candidates that are in mint condition with no health issues to compromise about.

Emerson was a 6 weeks old puppy who was transferred from one shelter in Florida to another one up north. He was an adorable black Labrador mix that will swoon the hearts of anyone who laid eyes on him.

However, the poor pup had some medical complications as he was growing. He experienced seizures and canine parvovirus, a highly contagious infection.

Lucky for him, the foster-rescue shelter he was residing in, NFR Maine helped him recover and eventually listed him up for adoption. Though he was completely healthy, there was still once issue that kept him off from finding a forever home.

He was having hearing difficulties that might or might not have been presence since birth as well as vision impairment, which Lindsay Powers, a rep from the shelter shared with ABC News.

She put his details up in Facebook and weeks later, received an application from a Nick Abbott. She later learnt that Abbott was also born deaf. Powers mentioned that Abbott’s immediate words were ‘I’m deaf also and I feel like we’d have a good connection’.

It was love at first sight when they first met and they have been soulmates since. “It’s amazing. Whenever they’re together, Emerson is always finding a way to lean on Nick..” Metro UK shared of Nick’s mother Richelle’s statement.

Abbott even taught Emerson sign languages to give basic commands such as to sit, lie down and come forward. They understand and respond to each other so well that whenever Abbott touches Emerson’s ears, he barks fondly.

The cute owner-dog duo even have an Instagram account together to document all their precious moments together. It’s highly admirable to know that there are still people out there kind enough to share their love and care without inhibitions.