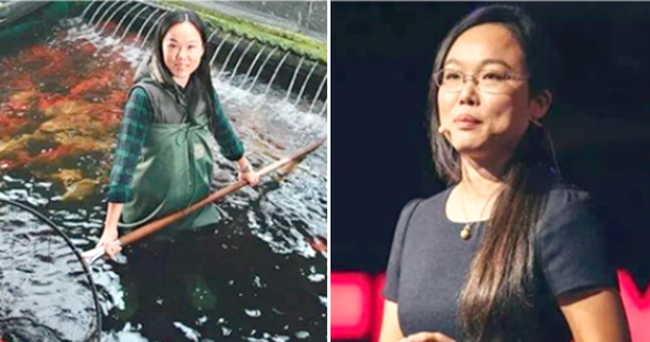 Life is a long road, a road full of twists and turns. In life, we may face difficulties, and those difficulties, more often than not, lead us to a better life. We just have to think clearly and make the right choices.

This is the story of the ‘Queen of Koi Fish’ from Taiwan. To pay off her father’s huge debt, she risked her future, leaving college to raise fish. Now, a single koi fish can be sold for US $2,302,550.00.

Zhong Yingying was born into a wealthy family in Taiwan, with a net worth of over US $17M. Her family owns a fish farming industry and agriculture. She has lived a happy life since childhood.

There were more than a dozen servants, in the garage of her home was a Rolls Royce… But at the age of 26, her father failed to invest and left a debt of US $7,050,800.00. Every day the creditors collect their debts. Only 3 hectares of fish and koi ponds remained in the family.

She had no choice but to leave her studies at Tsinghua University and continue the family business to pay off her father’s debt.

The former princess wore a frog costume and brought fishing gear, soaked in the fish pond despite the cold or the heat, and only slept for 4 hours a day.

Finally, she managed to produce high-quality koi, and the most expensive ones were sold at sky-high prices! Her koi were sold in the European and American markets, she also paid off her father’s debt and lived happily with her family. She has now earned the nickname “Queen of Koi Fish” from Taiwan.

Before, Zhong Yingying had never worried about her life. But at the age of 26, everything changed. At that time, she was still studying for a master’s degree at the Tsinghua Academy of Fine Arts.

One weekend, as usual, she went to a fancy mall and swiped her card for shopping. Her mother suddenly called and said, “Your card can no longer be used!”

It turned out, the family had gone bankrupt because of her father’s failure to invest in the real estate business. Her father not only lost all his possessions but also had a debt of about US $7,051,000.00! The only things left in the family are a 3-hectare fish pond and koi fish.

Overnight, life fell from heaven to hell. After thinking about it, Zhong Yingying decided to leave her studies and go home to help her family. This was strongly opposed by her parents.

“No! You understand nothing but painting and dancing. If you drop out of school, our last hope will be lost!” said her father.

But Zhong Yingying remained steadfast in her stance, with tears in her eyes she said: “Now it is the most important time to find a way to make money. If you guys worked hard to no end, while I study casually, I won’t be comfortable for the rest of my life.”

She left her studies and returned to her hometown. To help her family, she looked everywhere for work, but to no avail.

In the end, she had to work as a private tutor. However, this could only temporarily settle her expenses, and her family matters were still a burden on her mind.

The only hope of the family is a koi pond, if the koi fish are cared for properly they can be sold for millions and even billions.

Since there was no money to pay the workers, her parents would go to the fish pond to catch fish, and sometimes they had to and find fish where the water was very cold for hours.

Koi farming is a physical activity, and you will have to carry tens of kilograms of fish feed. Not to mention, Zhong Yingying has been afraid of water since she was little, her skin is allergic to ultraviolet rays.

But Zhong Yingying had no choice. Her family is overwhelmed with millions in debt. Her old grandfather had to work day and night. As the eldest daughter of the family, she chose to be in charge.

And so, the princess who was once wearing a beautiful dress put on a ponytail and a waterproof suit. Starting a small job, she began to spend her days in the fish pond.

For the past 3 years, she had to get up early and sleep late, feed the fish, manage water quality, disease control… all by herself.

Her skin, which was once smooth white, was now tanned and her hands were badly cracked. She doesn’t look like she’s in her 20s but is in her 40s due to the stress.

But she also goes from not knowing fish at all to memorizing hundreds of koi species and characteristics, and she can take on the important task of breeding koi herself.

However, family life is not much better, and many of the koi that are kept were sold, but not much money yet was made.

After some thought, Zhong Yingying asked a friend to help with market research. Only then did she know that she was selling koi for hundreds of thousands of dollars, but that it could be sold for tens of millions of dollars in Europe!

Of course, these are of a rare breed, as Europeans understand the art and have a great demand for high-quality koi.

Therefore, Zhong Yingying decided to change her strategy, she wanted to cultivate koi fish to be processed into works of art, and turn agricultural products in the same way, so that they could be sold at a higher price.

She spent a week persuading her father to raise some money to acquire several rare breeds.

Since then, Zhong Yingying has been soaking in the fish pond, regardless of summer and winter.

She finally managed to cultivate high-quality koi. She was confident and prepared to take her koi to Germany and participate in the exhibition.

She saw that the customer was sincere and had a lot of money, so she agreed. Unexpectedly, the customer cheated about the koi fish.

Zhong Yingying returned to the small hotel where she was staying, thinking that the exhibition would open in a few days but she has been scammed, thinking about her credit card and borrowing a lot of money to come to Germany, working hard for several years, and finally being able to live a good life, but that hope was lost.

The more she thought about it, the sadder she became, she couldn’t help but cry, she called her friend to complain, and the friend quietly listened, and said, “Now is the time to find a solution to this problem.”

Only then did Zhong Yingying calm down. Now that something has happened, she thought hard about how to deal with the problem.

She encouraged herself: “Isn’t it that the fish don’t need to participate in the exhibition? Wouldn’t they be willing to buy my fish even if they couldn’t see the actual fish yet?”

So, she used her artistic skills and designed her exhibition booth into oriental style, overnight. She stayed up late to decorate her station.

The exhibitors were very surprised and came to ask about the fish. Zhong Yingying calmly replied: “You are late, and the fish has been bought.”

Not only that, but she also told customers that had lied to her to go to the shop, saying they had bought it.

In this way, news spread in the exhibition area, a girl from Taiwan sold all her fish in just an instant!

Many customers flocked to her station. After reading the information, they praised the koi and ordered.

In this way, Zhong Yingying got a lot of orders, and her koi were also known by more people.

Mr. Grothees of the Netherlands said: “The Dutch’s self-produced koi can reach grade A, and Zhong Yingying’s koi standard has reached 3A.”

Its reach has spread widely, and many customers ordered her koi. The orders include Europe and other world countries.

Her business was getting bigger, and her popularity was getting higher. To date, she has won 11 awards in the industry, including 4 times champion, and is known as the “Queen of Koi Fish.”

Having a strong heart allows one to see hope in despair. Pessimism will only make you lose energy and lose opportunities in the face of hope.

In the face of adversity, you can choose to cry, run away, or refuse, unlike Zhong Yingying.

The natural result of avoidance is a failure, the struggle to resist. There is still a possibility of success. Your future is in your hands. Success or failure depends on you.

Korean cleaner paid $850 to clean up ‘the dirties house they...