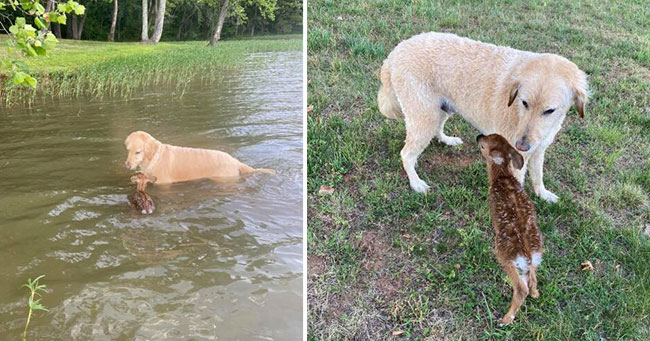 A heartwarming incident that demonstrated an immediate friendship bond between two animals of different species recently occurred in Virginia, USA. A newborn fawn accidentally fell into the lake and was about to drown. Fortunately, a dog managed to save him. The next day, the fawn came to look for the dog, a gesture of appreciation.

In the morning of June 2, Ralph Dorn, a 62-year-old man from Virginia, was looking for his dog Harley by the lake behind his house. He then saw his 6-year-old golden dog swimming in the lake with a fawn next to him. It turns out that Harley was saving the fawn and is trying to get her to shore.

Dorn shared Harley’s story of rescuing a fawn and posted many photos on Facebook. He wrote in his post: “Not sure how this deer got there, but Harley didn’t seem to be asking why. He just took action quickly.”

Dorn told People that Harley helped the deer to land, then licked it, interacted with it, and groomed it. This fawn may be only a few days old.

The mother deer appeared not long after. When Dorn saw the doe, he took Harley home. After they left, the doe took the fawn away into the forest.

The story did not end there. The next morning, Dorn and his wife were drinking coffee at home. Harley suddenly ran from window to window. Dorn then opened the front door to get him out, but to his surprise, they all heard the cries of a fawn.

Dorn said on Facebook that Harley ran to the edge of the woods and found the fawn crying. However, after the fawn saw Harley coming, he immediately stopped. They wagged their tails and sniffed each other until Dorn finally brought Harley home after the fun reunion.

He told People that after a brief reunion with Harley, the fawn stayed in the same place with the doe until nightfall. Then he never saw them again.

Dorn, a retired Marine Corps pilot, said he was not surprised by Harley’s heartwarming actions. Harley has always loved being with children and animals.

Dorn’s Facebook post received an enthusiastic response, and he said, “We are so happy that this story touched so many people and brought joy to everyone.”