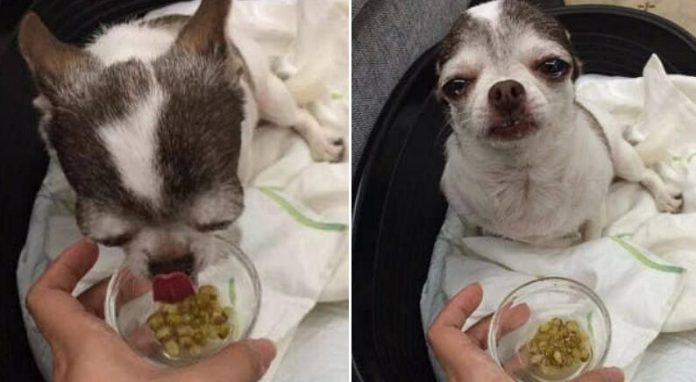 Although humans and dogs are two different species, this doesn’t stop them from forming a bond that can last a lifetime. Many dog owners love their pets as part of their family and these pets stay with them for many years. The dogs on the other hand feel that their world revolves around their owner.

Unfortunately, there is not much we can do when our pet’s health has started to deteriorate. We can have them treated by the vet just as much. But when they are suffering from multiple organ failure and their days are already numbered, owners can still make their last days worthwhile. A gesture that they can remember until they pass.

The dog in this story was in such a situation. The owner has kept the dog for so many years until he grew very old and he seems to have reached the peak of his life. The dog was taken to an animal hospital for a check-up, and the doctor’s said that most of his organs have already failed and no more treatment can be done to save his life.

“I think it would be better to make your last memories with your dog at home for he can no longer be treated.” The vet told the owner.

The owner, who was heartbroken at seeing the dog stretched out without force, boiled him the usual mondu soup.

When he handed the mondu soup to the puppy, he sat still and looked at it. Then it looked up at its master with tears in his eyes.

At the end of the day, the owner realized that this was the “last soup” that the owner had boiled for his dog. Barely shifting its deteriorating body, the puppy looked at his owner with tears in his eyes as though he was saying goodbye.

Shortly after, the puppy reportedly laid down and closed his eyes, and took his last breath.

The story has been shared through media and online communities and has become viral, with netizens reportedly bursting into tears.

A Newborn Baby Elephant is Attacked by Its Mother and is Rejected; Cries for Five Hours