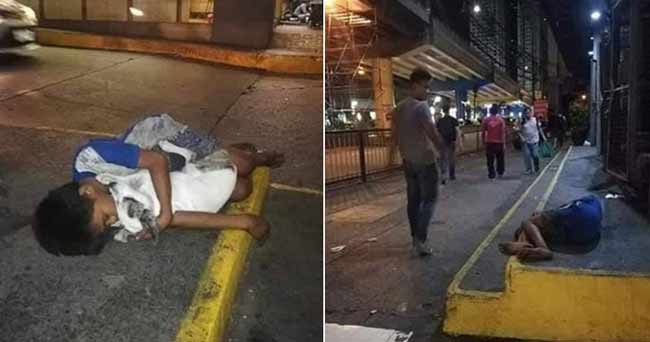 Have you ever wondered what an act of true love is? Maybe for some, it’s about giving materially, for others, maybe, simply just spending time with that special person.

For some people, an act of love can be shared with a person who is not part of their family, but perhaps acquaintances or friends.

People rarely think of animals like stray dogs or cats when it comes to sharing love. Though these are the creatures that are capable of showing us, unconditional love. That is true love.

It is not known whether the child in the photo was abandoned by his parents or an orphan. Unfortunately, there are still a large number of street children who spend their days wandering from place to place to get something to eat.

Recently, a photo of a homeless boy sleeping on the roadside hugging his dog, who has become his loyal friend and only family, has gone viral.

The heartbreaking image reveals two tiny creatures, a young boy and a dog, sleeping on the sidewalk while passersby ignore them, unaware that there are two bodies on the floor silently crying to be saved.

The boy has not been identified, so far, it is only known that he slept with his pet on the sidewalk near the train station in Manila, Philippines.

This little boy despite all that has happened did not abandon his dog, showing great bond and the true meaning of love and loyalty.

The photos were taken by Jem Villomo, a young man who lives in the city, and shared them on his Facebook account in hopes of raising awareness and ensuring that someone can give them all the help they deserve.

“The boy lives on the street with his dog. He didn’t ask for money but only food for the two of them,” said Villomo.

Due to Organ Failure, Doctors Could Not Save a Dying Dog’s...