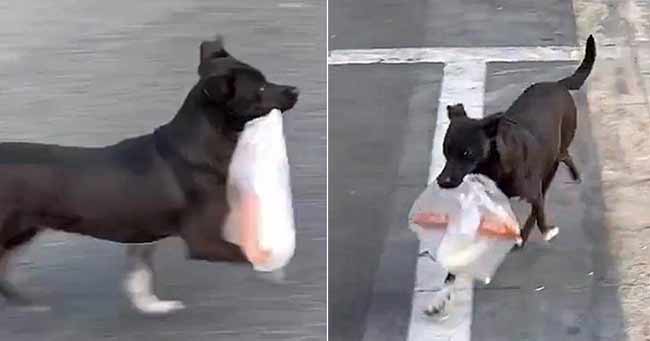 This is a heart-warming story of a faithful dog who knows how to repay the person who has helped him years ago. For years this dog brought breakfast home to his human grandmother, who had problems with her legs.

The dog was only a few months old when his previous owner abandoned him. He became a stray dog for some time when he was befriended by an elderly woman who adopted him, and he lived a fairly comfortable life.

His grandmother’s feet felt very uncomfortable for her to walk around, so the dog rarely got the chance to go outside and play with his grandmother, and his only chances were to go to the store to buy breakfast with her.

One day, the grandmother fell while going out, and the dog lost his only chance to go out with grandma.

At first, he felt unpleasant, but perhaps he was very familiar with the way going to and from the store, he vowed to go to the store every day since just to buy breakfast for his Grandma.

When the dog first came to the store on his own, the guard did not understand what was going on and why the dog would go there alone. But when the dog would leave with a bag of breakfast in his mouth, the guard started to understand. Apparently, every day when he saw the dog coming, he would take the initiative to prepare breakfast for him to take back to his Grandma.

It has been ten years since the dog went alone to the store each and every day, rain or shine, to buy breakfast.

The dog has now been considered an old dog, but still keeps on insisting to buy breakfast for Grandma every day. After all, he loved his Grandma very much and will not allow her to go hungry and have no breakfast.

People give animals a little good, but animals repay even more. Be kind to animals. People meet a lot of other people in their lives, but for a loyal animal, there is only you in their lives.