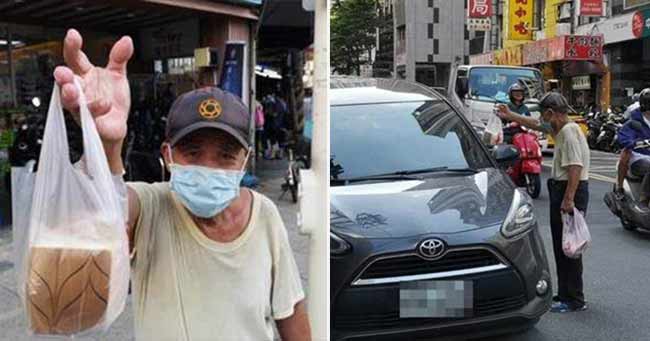 There is a saying that goes, “Don’t judge a book by its cover.” Even some people selling along the street may have a hidden identity behind them!

An old man in his 80s sells goods daily on the roadside. When he sees passersby, he would step forward to offer his products for sale, which made many people feel overwhelmed, but after netizens dug into his identity, they discovered that things were not as they thought…

According to news reports, this old man, who is called the “cake master” by the locals, has been selling cakes in the area for more than ten years.

Previously, he also sold bread, sandwiches, etc., whenever he would stand on the side of the road or at the door of a shop selling his cakes to passers-by.

Even when a car stopped and waited for the traffic light, he immediately walks to the car window, raises his right hand, and offers a cake he is selling to the person in the car and asks, “Want to buy some?”

In his case, although the locals were used to what the man was doing, however, some people still thought the old man’s attitude was too excessive, and sometimes his actions were quite dangerous, which made everyone feel troubled.

If people call the police, they can only advise him because his actions are legal. In addition, some people felt sorry for the old man, saying that he often wore a yellowish-white T-shirt, with a big hole in the shirt’s shoulder.

Obviously, he was from a poor family, so as long as he passes by and people see him, they would definitely buy a bag of cakes.

However, some people reported that the old man’s real identity was actually a financially-able person, and he owned a large house for rent. The reason he went out to sell cakes was simply that he didn’t want to be at home.

However, this statement was quickly refuted by the old man’s daughter, who stated that they were not rich and that his father had given the house to his son, and now he lives with his other son.

His daughter once persuaded her father not to go out selling cakes, but he persisted, so his daughter allowed him, thinking that he may be needed the exercise, too.

Never assume a person’s identity, especially if you know nothing of the individual.