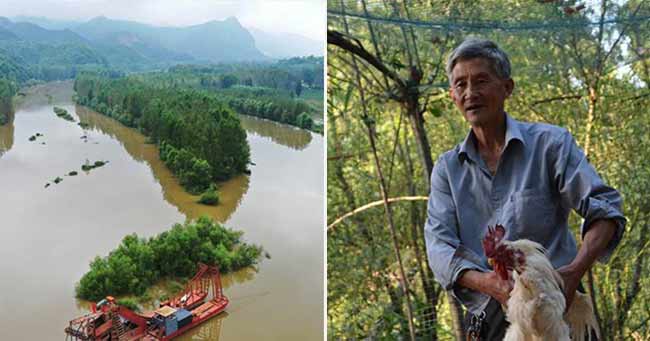 Mr. Zhang Yunxian, 69, and his family are the only islanders in Song County, Henan. Six years ago, his son died of illness and owed more than Rp 1.3 billion.

Zhang felt very depressed at that time because his house was confiscated. He then took his wife and grandson to live on a small island, farming and raising chickens to earn money to pay off debts.

Yuanzigo, Song County, Henan Province, China, was originally a fertile land before a small reservoir was built downstream, where a large river flows. There is an island in the middle of the river with a width of about 20 meters and a length of about 200 meters.

After his son died of illness, it turned out that he had owed a lot of debt, and many came to collect.

Uncle Zhang said: “I don’t have any money, and those who come to collect debts take turns. I can’t afford it anytime soon, but, as long as I’m not dead, I’ll try to pay off the debt.”

In the hut where Uncle Zhang lived, there was a small old book. It contains details of the debt. Every time he paid off a debt, he would cross it out.

When it comes to raising chickens, his daughter Zhang Yanzhi has provided him with a capital by sometimes sending him small chicks.

After the media coverage of his story, many people learned about this place that felt like heaven. Some people came for fishing and sightseeing, and some made special trips to visit Uncle Zhang and buy his chickens.

When it was time to eat, Uncle Zhang would treat his guests with eggs and noodles. If someone leaves him money, he refuses to receive it.

“We can’t provide good food here. Whoever comes, everyone will be served with egg noodles,” he said.

Local officials also came to the island to offer condolences and ask him to look after the island. The power company also specifically has installed electricity into its premises.

Life on the island is very sad, raising chickens is not as good as expected.

His kitchen was a small shack built when he first came. The asbestos roof is old, and the shed leaks when it rains.

After the little grandchild goes to school, their own lives are actually more frugal. Apart from growing some crops such as peanuts and corn on the island, they usually eat most of the peppers.

Due to the frequent rains in Song County this year, the river water rises high, and many crops on the island are flooded, corn has to be harvested early and the bean fields are given high embarkment to prevent flooding.

The rivers on both sides of the island are being dug deeper due to sand mining, and the area of this small island is decreasing from year to year. Because the local officials once gave Uncle Zhang a message to guard the island, Uncle Zhang often quarreled with those who came to dig sand on the island.

The little grandson, Haohao, is 9 years old. Following his grandparents, he carried the burden at a young age. Collecting eggs and doing farm work, you probably never imagined that a child less than 10 years old already has calluses on his palms.

Uncle Zhang didn’t know when cats came to the island, the cats had broken the eggs before they could be taken. Many of the chicks purchased are also eaten. Uncle Zhang had to buy a flock of geese to help him guard the place.

Honesty and trust are virtues, but in recent years there have always been attempts to undermine trust between people.

For the past 6 years, Zhang Yunxian’s strong will has been stifled by the wind, eating and sleeping on the island. Apart from selling eggs, he refuses donations from sympathetic people. He just wanted to pay off his debts with his own efforts.

They were getting old, and his grandson Sun Tzu Haohao’s school fees were increasing every year. What will happen to them next year?

We can only hope that Uncle Zhang will always be given health and long life so that he can take care of his grandson until he grows up, and this makes his grandfather happy.

Teen’s life turn around after he custom-made a prom dress for...