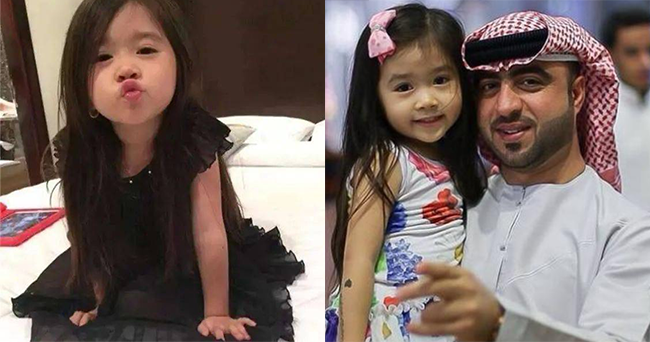 Think of this question: “What would you do if your child was suddenly admired by others and someone wanted to adopt him? I think most parents will reject it outright. But what if the person who wants to adopt the child is very rich, or even a billionaire?”

Such multiple-choice questions fall on the family of a 5-year-old girl named Breanna Youn. Breanna is a mixed-race Korean and Filipino. Her father is Korean and her mother is Filipino. Breanna has been beautiful since she was born, with fair skin and a charming face. Her parents run a seafood export business in Busan, South Korea, and her family background is quite good.

Before meeting with the rich person who wanted to adopt her in Dubai, the beautiful Breanna Youn was already a celebrity. This is because Breanna’s mother often posts her daily photos on Instagram to record the growth of her cute baby. She has become an instant celebrity after the “show baby” show.

According to the UK’s “Daily Mail” report, she has more than 1 million fans, and most of the fans are from the Middle East. Fans in the Middle East are very generous, and Breanna Youn often receives various luxuries from fans such as LV, Chanel, Gucci. .. But when it comes to actual “pinnacle people of the Middle East”, we can actually say that most of the rich people live in Dubai.

A mysterious rich man is also a fan of Breanna Youn. After giving enough luxury items to his “idol”, he invited the girl’s family to Dubai for an outing.

What happened afterward is unknown, but the result was that Breanna’s parents agreed, and the Dubai tycoon became Breanna’s father. Breanna also has three other Dubai brothers.

Having owned possessions far beyond their years, Breanna’s parents discovered that their daughter lived happier in Dubai, and she lacked nothing. To better accompany her daughter, Breanna’s birth parents also moved to Dubai.

To show his gratitude, the rich man gave Breanna’s family a luxury car and mansion. Every day there are luxury cars to ride, eat good food, wear branded clothes, and given branded goods. Breanna’s life on social networks has become more and more like a “super celebrity”.

Other than that, Breanna changed her faith and became a Muslim, and she also changed her nationality and became a Middle Eastern woman. Black clothing has become everyday wear. And as she got older, Breanna became less and less able to enjoy the freedom of social networking as she did when she was a child. Why? Because Dubai believes that when a girl’s secondary sexual characteristics develop, it is not suitable for publication.

If not, why do the princesses of the Dubai royal family post so many photos in their childhood, but those photos become less as they grow up? Frankly, this is a restriction for women by local customs.

Influenced by tradition, women are regarded as subordinate to men, and women’s greatest role is to give birth. The more births, the higher the status. A man can marry many wives and have absolute control over the marriages.

Women, even if they want to go to work, must get the consent of their guardians. The guardian may be the father, younger brother, older brother, or husband in the family. It also means that, since Breanna is a Dubai national, it is likely that she will share her husband with other women in the future.

Breanna, who was originally a socialist and has millions of fans, is not worried about income. But, who can resist sudden wealth? At least, Breanna’s parents didn’t object. It can be said that beauty is a stepping stone, and today’s wealth is exchanged for marriage and the future.

There is no denying that this kind of wealth is a luxury that many people cannot reach in a lifetime! As for whether it’s worth it, that’s probably a matter of an individual’s opinion.