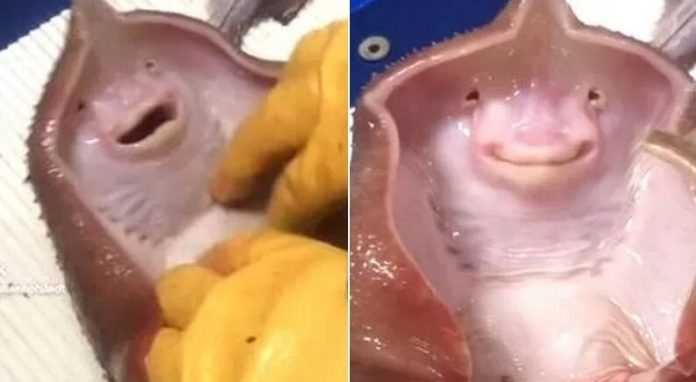 Tickling stingrays. A very rare sight to see. It is something very strange and difficult to imagine.

However, a baby stingray was captured on video laughing while being tickled by a fisherman. The video was recently released on an online video platform called TikTok.

The video was released last month by Christian Hofstedt, who lives in Denmark. On June 23, he captured a video of a baby stingray before it was being cleaned.

Although the stingray was about to be killed, a fisherman took advantage of playing with the little fish. Wearing yellow rubber gloves, and holding a knife, he began to tickle the stingray’s belly.

Surprisingly, the stingray crouched and “laughed.”

The baby stingray opened its mouth and literally laughed as he looked at the fisherman with its small round eyes.

In the video, you will hear the laughter of the fisherman while he continues tickling the stingray. Laughter from people in the background could be heard, too.

Christian says he couldn’t get enough of the stingray’s smiling face but sent it back out to sea.

The video of the baby stingray’s laughing has spread on social media and online communities and has become a hot topic among people around the world.

Happy fisherman, happy stingray. So far the cutest and most entertaining short video people have seen on social media.