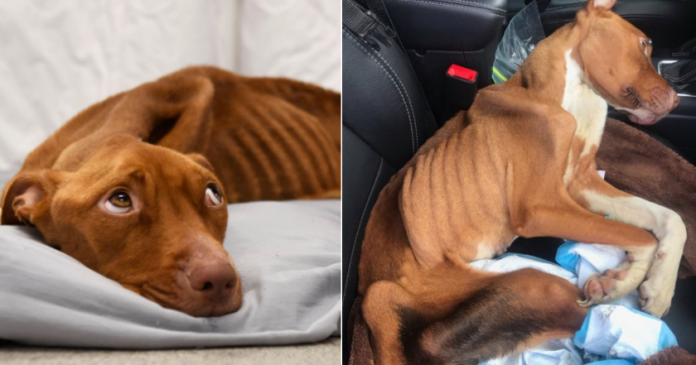 There has always been the saying that goes, “The eyes are the window of the soul.” In the case of a rescued dog named Hadley, it was evident by just a look in her eyes that this hairy bundle had gone through the worst of luck. Just in time, a woman found her on the streets, and her heart broke upon seeing the condition of the dog.

The woman knew that the dog was too weak to move her head, so she did not hesitate to contact Stray Rescue St. Louis rescuers. The rescuers were in shock when they saw the dog, despite having experiences in dealing with other rescued stray animals.

“We don’t really know what happened, but I’m sure she had to live through hell,” a rescuer lamented.

The poor little dog was one of the most serious cases. They have called her Hadley and carefully transported her to the vet. It was very evident that she was very exhausted and gave her look to every person who passes by, clearly asking for help.

“This little dog has broken our hearts. Making any movement is a titanic effort for her,” said one of the rescuers.

The rescuers and the vets wondered how she managed to survive in such a dangerous situation, though they are thankful that Hadley was rescued in time and she is finally in good hands and they have saved her life.

“This little angel needs our prayers. She can’t get up, and she nearly starved to death. We hope we found her just in time,” said a Stray Rescue spokesman.

They started giving him small, steady doses of food. She had probably been hungry for weeks or months; so they had to help her resume feeding very carefully.

In her current condition, being fed too much food could become unsafe for Hadley. She needed to be monitored at all hours and one of the vets decided to take her under her protection.

“Hadley is beautiful. I’m so sorry about everything that had to happen. Her look of pain says it all,” said a Stray Rescue spokesperson.

Emily became her new human mom and took a couple of days to devote all her time to Hadley. It won’t be a simple process, but the sweet little dog has started to recover.

It’s a real miracle that the sweet little dog had managed to survive. Though we will never know the whole truth about her difficult past, it is really unbelievable to know that someone would leave the poor little dog in such a pitiful health condition.

If you see an animal in distress, please do not hesitate to support it and contact a rescuer. It may be the last chance it will fight for its life. Share this story on your social media.