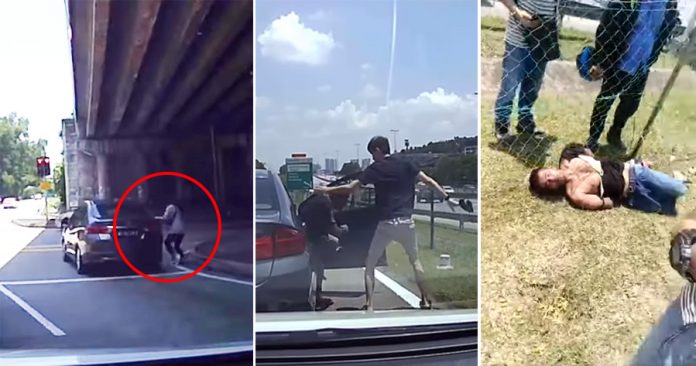 One of the best traits Malaysians are most known for is when they band together and help someone in need. It was truly a memorable moment when a group of individuals worked together and chased a car thief who hijacked a woman’s car at a traffic light in broad daylight.

In a video posted on Facebook, the woman can be seen standing outside the door of her Honda City, just after she stopped and was pulled out of her car. She attempted to get back inside, but probably out of shock and in a state of panic, she motioned to the other drivers for help.

The car thief then drives away in the Honda City as fast as he could, but the other cars cornered him. They failed once, but they still chased him determined to catch the thief while they continued with their pursuit.

The video shows four cars successfully cornering the Honda, one in front, one behind, and two at the side.

The driver from the car behind the Honda gets out and yanks the car thief from the driver’s seat. He then pulls the car brakes as it probably was still in gear.

The suspect did not attempt to run away, so the man knocks him to the ground and restrains him while the other drivers get down from their vehicles. The victim, who rode in one of the cars in pursuit, and the others gather around the suspect.

The incident has happened at 1:58 PM on the 13th of April at Sri Petaling heading towards Kuchai Lama.

As of this writing, it is uncertain if a police report has been made available. Any updates on the incident will be updated accordingly.

It’s amazing what Malaysians can do when they come together for a common purpose. Great job to all the drivers for apprehending the suspect!