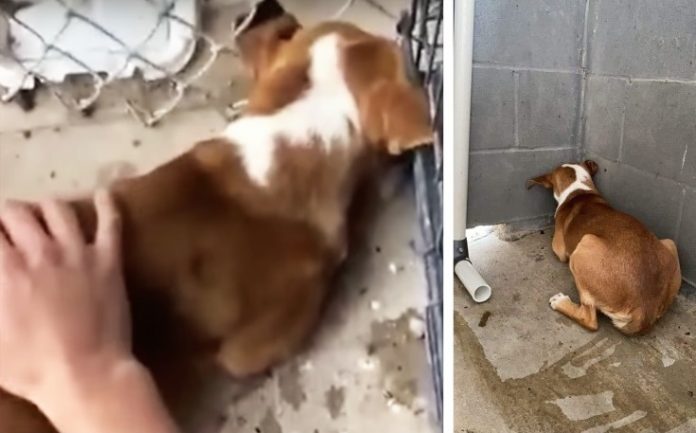 Many animals have been exposed to great injustices, which slowly end up breaking their hearts, plunging them into deep sadness and making them feel fearful of the humans who have done them so much harm. Sadly, this is what happened to a poor dog named Gia, who received the worst treatment from her “family” and came to the shelter shrouded with fear.

When Gia arrived at a small local Texas shelter, it was clear that something was wrong with her. She crouched in a corner in panic, and every time a human approached her she trembled even more. She couldn’t bear to be touched either, if someone did, she would pee out of fear and she would stay there, too fearful to move.

The reason behind her behavior was the mistreatment she had received throughout her life with her former owner.

She was tied to a tree and treated in the worst way by her owner, the person who once have filled her with love. Upon receiving physical and psychological abuse, her heart was broken and she almost completely lost the happy spirit that once characterized her. She needed help, more than they could give her at the shelter.

Fortunately, the association specializing in the care of the most difficult rescue cases, DallasDogRRR, stepped in and through love, patience and kindness worked to rehabilitate dogs like Gia.

Gia is at the Dallas Dog Shelter and is already making progress. When humans approach her, she hides under her bed, though she has already been able to stop peeing when she sees them. It will be difficult for her to open her heart to people again, but the association’s volunteers hope to achieve it.

However, Gia’s behavior towards the other animals is totally different. She loves playing with her canine companions from the shelter, running around, because she knows they won’t hurt her in any way. Despite everything, she is happy among her own.

To make Gia lose her fear of humans, the association has decided to take her to a temporary foster home, with a specialist in traumatized dogs, where she will live with her tentative family and learn that she is finally safe and no one will ever hurt her.

Her new foster mother knows that this is a difficult case, that Gia is not ready to interact with people, but she may be more open through the pure heart of another dog companion.

‎“Gia is home. She has not moved from the box that was used to transport her. She’s very afraid, she doesn’t tremble anymore, though, but she’s still not ready to move from that place. However, her ears are alert with the sound of my little puppy Austin, so I hope he can attract her,” the caretaker said.‎

You may watch the video in RUMBLE here.

There is much pain that humans can inflict on animals. We hope that one day Gia will be able to leave all her sad past behind her and that she can have the happy life that she has always deserved.

Let us add our hearts to Gia’s, to help heal all her wounds.‎