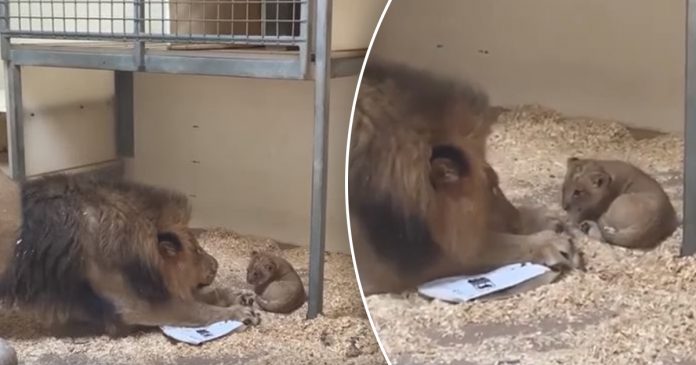 The male lion is usually not very ‘friendly’ with his newborn cub. However, something else is proven through a video uploaded on Facebook.

Recently, a lion cub weighing 5.4 kilograms was born at the Denver Zoo.

Since birth, the lion cub has only spent time with his mother, Neliah.

Then it was time for the lion cub to be introduced to his 2-year-old father, Tobias.

Quite surprisingly, the reaction of the adult lion was very clear and he expressed his feelings of affection towards the cub.

According to Jake Kubié, Denver Zoo’s Director of Communications, the lion cub is very agile and active, in addition to having a high level of curiosity.

Maybe even he wanted to get to know his father. Lucky for the unnamed lion cub, Tobias looks like he has fatherly affection when he sees his own cub.

The most heart-warming meeting between father-and-son!

Male lions are known to be “King of the Beasts” and dominating. This one felt more affectionate towards his cub.

Sadly the number of species of African lions such as these has been declining drastically in recent years following the threat from hunting activities.

Therefore, the birth of Neliah and Tobias’ cub gives meaningful hope for organizations that work hard to conserve this species.

Watch the cute interaction between father lion and cub here: (Courtesy of Denver7/Facebook)