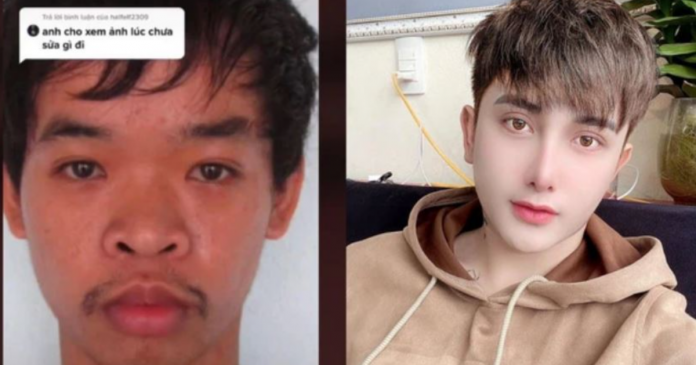 A little enhancement done during plastic surgery is considered okay, though, it garners compliments and backlash from people. Some simply improve their looks, and some go way too far they get ridiculed for the results. A young Vietnamese man completely changed his looks through multiple plastic surgeries when he was humiliated in job interviews for his looks.

The man showed photos before and after his plastic surgeries, causing a huge surprise among netizens. The 26-year-old originally had dark skin, and 5 work interview appearances had failed to land him a job due to his looks. Angry and humiliated, he resorted to multiple plastic surgeries, spending more than VND400 million (RM70,000) to achieve his new look.

Among the surgical enhancements, Quyền went for include rhinoplasty, nose fillers, chin implants, porcelain veneers, lip reshaping, lip implants, double eyelid surgery, and eye enlargement. Fate for Quyền has changed since then, and good things have happened. Now living in Saigon as a make-up artist, his photos online have gone viral.

Đỗ Quyền, a young man from an ordinary family, has had 5 job interviews but was never accepted in one due to his average looks. They even humiliated him because of his appearance. But instead of giving up on himself, he decided to improve his looks and spent thousands of money on nine major plastic surgeries, shaping himself into a look of an American man.

The surgery was so successful that Đỗ Quyền immediately attracted a large fan base when he greeted everyone for the first time with his new and improved appearance as an American-looking man on TikTok videos. Sometime later he posted a 2-photo collage of his look on Facebook before and after the surgeries.

He said that when all the surgeries were done and he has recovered, he returned home and his parents could not recognize their son.

“The first time I came home after plastic surgery, my parents did not recognize me,” he said in a TikTok video, as translated by Oddity Central. “I expected as much, but I still could not hold back my tears.”

Some netizens compare his new look to other celebrities, but he says that his standard for beauty is that it’s enough to feel satisfied and confident when you look at the mirror, and not comparing him to someone else.

“Always be strong and find the beauty that you are most confident in,” he said.