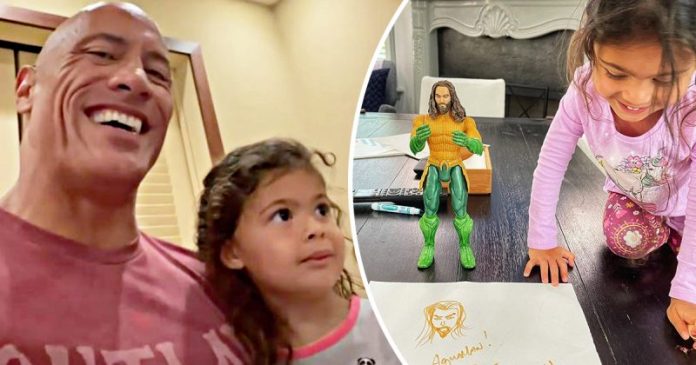 A father’s daughter usually looks up to him as her hero. Though in this case, it turned out quite differently for Dwayne “The Rock” Johnson and his daughter, Tiana, whose hero turns out to be Aquaman. 😂

When the great hero himself, The Rock asked his daughter, Tiana, “Who is greater, your father or Aquaman?”

Then Dwayne “The Rock” Johnson surprised Tiana or Tia by giving her a surprise third-birthday present when he contacted his friend Jason Momoa or Aquaman via video call for a small conversation with this cute little one.

Everyone seems to already know that Tia is an obsessed fan of the aquatic superhero so she honestly admits and thinks Aquaman is more awesome than her own father. 😂

Tia even asked if Aquaman can join them at breakfast on the morning of her birthday.

“You have this birthday obsession with Aquaman,” wrote Dwayne on his Instagram page.

The Jumanji star uploaded a video on Instagram when ‘Aquaman’ sent a message to Tia on her third birthday, also to her sister, Jasmine who is now 5 years old.

“I’m sorry I can’t be there, but I love you. Tell your dad that I love him too. I will see you all soon. Happy third birthday. Tia! And Jazzy, I love you,” Aquaman said in the video.

What’s more, Tia also felt so excited and jumped for joy when she received her gifts and birthday greeting messages from her idol, the superhero himself, Aquaman.

“I had to make a call… That’s what a father does. Thanks to my sister @prideofgypsies (Aquaman) for making this cute 3 year birthday the best and the most fun. The reaction is priceless and that’s all that matters,” the loving father, The Rock, wrote on Instagram.‎

All fathers will do the same as The Rock did for the sake of their beloved children.

The Rock remains a special great hero in the eyes of Tia, Jazzy, and Simone.