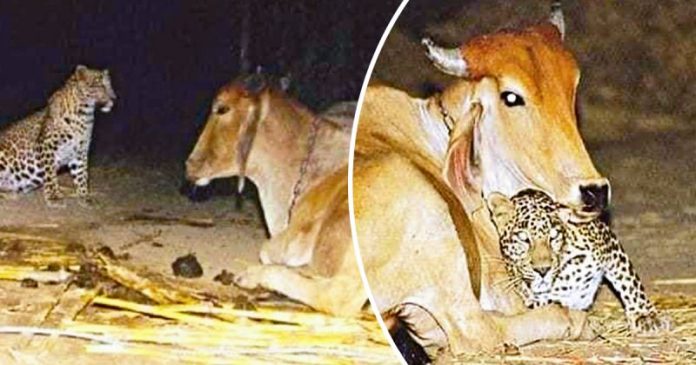 Although many years have passed, the story between a leopard and a cow has still raised questions with the people who live nearby. Behind that unique story, several versions are often heard. And apparently, the story between these two animals is actually very touching.

It all started when a family often heard their pet dog barking in the middle of the night. So they decided to put in closed-circuit television (CCTV) cameras to see what caused the commotion in the vicinity.

Apparently, there is a leopard that often comes to ‘visit’ their pet cow in Antoli Village, Gujarat, India. What is surprising is that the leopard was not there to kill the cow. In fact, they seemed to know each other and are good friends.

The animal then reappeared from 4 to 29 November of the same year.

Not only that, the leopard kept coming to see his ‘friend’ until the first week of March, and then never came back again.

There are many different interpretations and stories of what happened between these two animals.

Among the most famous stories that circulated among the public is that the cow and the leopard are good friends because the cow used to help it when it was still a cub.

The mother of the leopard is said to have died and at that time her baby was only 22 days old. So, it was the cow that fed the little cub. Since then, the leopard has considered the cow to be his mother.

No one can tell clearly what exactly happened between them, but it is very real that the behaviors of the cow and the leopard are something strange and their relationship is quite remarkable!

A Stray Dog with an Injured Paw Enters a Veterinary Clinic...