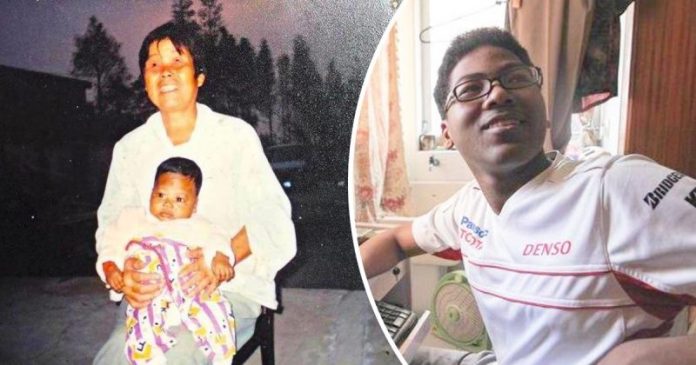 Everyone has their own history and stories while growing up, pleasant and joyful ones, and for some, also sad stories. However, no matter how unpleasant some events of life have been, life still needs to go on for everybody.

This inspirational story is about a baby who was found many years ago, and today he carves out his own success.

A teenage boy who is now 18 years old, Zhu Junlong is said to have been picked up by an elderly grandmother after he was left by his birth mother in the bushes in Shanghai.

When Zhu’s adoptive grandmother found the baby, she immediately took him to the hospital. There, the doctor confirmed that the baby was a mixed-race of Chinese and other foreign blood. Zhu’s grandmother then decided to take care of the baby even though she was living in a difficult situation.

At that time, Zhu’s grandmother had two sons and a daughter. However, her husband and other family members remained supportive of her decision to care for the baby.

However, problems arose when Zhu wanted to be admitted to the school. He was once rejected because he did not have a valid birth certificate. After many attempts in convincing the school and acquiring himself the proper requirements, Zhu was finally accepted into the school. He even received education for free and received several hundred yuan of subsidies each year.

After 14 years the issue of Zhu Junlong’s birth certificate registration in Shanghai was resolved and the local government learned of the adoption, they were housed in a 50-square-meter house for Zhu’s grandmother and his family.

News of the black teenager became public attention soon after. During a reporter’s interview, Zhu Junlong enthusiastically said, “I love watching X-Men, Transformers, and Japanese anime.” He also talked about books he had read, such as “The Giants,” and “Count of Monte Cristo.”

The most gratifying thing is that after Zhu Junlong was adopted the family received the good news that their daughter-in-law was pregnant.

Now, after 18 years, Zhu Junlong’s grandmother can breathe a sigh of relief when her adopted grandson is now ready to enter a university.

The teenager also promised that one day, when he is successful, he will buy a villa for his grandmother. He will also work hard for her. As early as now, Zhu Junlong has planned his future already, such as, when he comes home from work he wants to cook for his grandmother and he also wants to take her out shopping.

Hearing those promises made Zhu’s grandmother’s heart so touched that she cried. She hopes that her grandson has a better future.