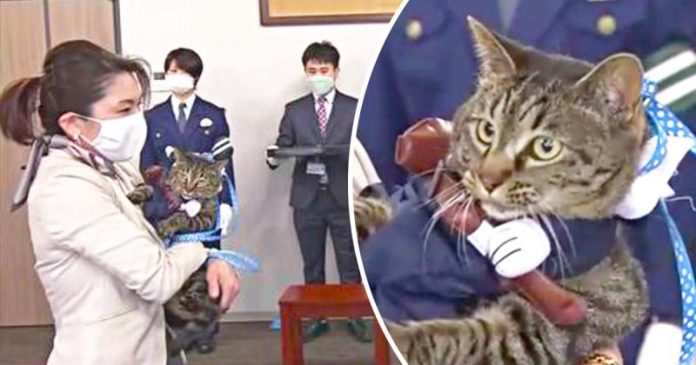 On April 13, a cat from Japan was ‘appointed’ as the head of the police division for one day following her services in rescuing an elderly man who fell into a water channel in Toyama City, Japan.

The cat, called Koko-chan, at the time of the incident, had given a clue to its owner about the fallen man, and subsequently managed to save the poor man’s life.

According to the NHK Japanese news report, Koko was awarded a certificate appointing her Chief of Police for one day in a modest ceremony.

Take a look at this certificate Koko has received, it is complete with Koko’s cute ‘signature’… her paw print!

After receiving the appointment letter, Koko then spent the day at the Traffic Safety Department and also attended a presentation on traffic safety laws with a group of primary school students.

To further complete her ceremony and post on the day, Koko was also dressed in a police uniform, complete with a cute hat on her head!

However, looking at some pictures of Koko in her police uniform, it seems that Koko is not satisfied and not at all pleased by the award she received.

Her face clearly depicts exhaustion and wishes that all this would pass quickly!

She is so funny!

Congratulations to Koko for her services in saving human lives. Although Koko seems reluctant to attend and accept the position given, it’s okay, because Koko is so lovable, for sure she will always be remembered for her heroic demeanor!