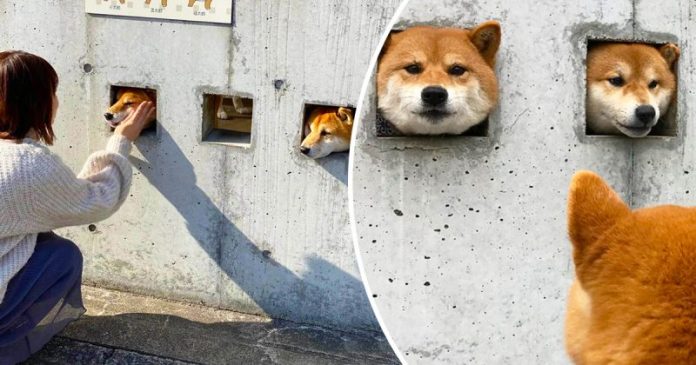 On a quiet street near Shimabara Castle, Nagasaki, stands a normal fence wall that looks as high as the residence behind it. Though it is actually a tourist attraction because of the unique ‘scenery’ it provides – 3 Shiba Inu dogs that stick their heads out through the holes in the wall, making them look like a decoration too cute to take a photo.

According to the owner of the three dogs, he initially made the holes in the wall of his house as he wanted air to enter his home.

Shortly after, the dogs showed curiosity and love to peep outside through the holes.

They often look out on the balcony if there is something outside, and since the holes were made, it became easier for them to see things happening outside.

Their story even went viral on the internet and many visitors from all over the world were drawn to the location to see the cuteness of the three dogs.

While there are visitors who greet them, the three cute dogs continue to stick their heads out at their respective holes.

This is also a view from behind.

‎”The dog owners are also very good. I spent an hour filming his dogs and he just looked behind the wall,” said one tourist from Taiwan.‎

The owner of the dogs also greeted the tourists who came to the location just to see for themselves the picturesque scene of the three dogs behind his wall.

Whenever you are in the area of Nagasaki, come and visit the tourist attraction of the 3 Shiba Inu dogs that peep through the holes from behind their home. 🐕🐕🐕