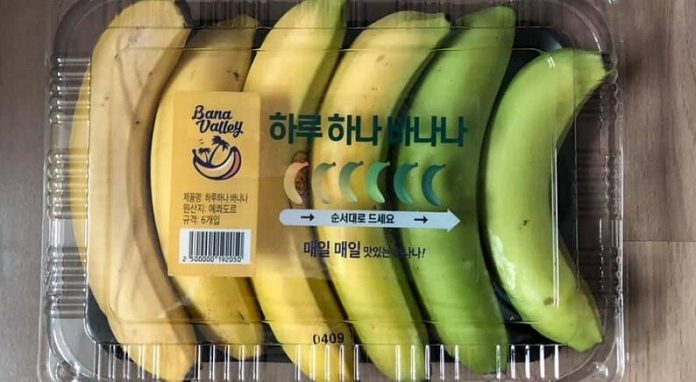 Korea is an evolving country. A genius idea that emerged recently involved a banana challenge. Citizens thought it was a brilliant idea and whoever came up with this idea should be recognized.

In 2018, high praises from all over the world poured out for the products that Korea’s E-Mart released. Everyone noted this, admiring E-Mart’s brilliant ideas.

In particular, The Times of the United States praised it as “a genius idea.”

The product name is ‘One Banana per Day’. As the name suggests, take one banana each day, and pack them back after you have eaten one.

The point to note here is the ripeness of bananas. Each of the six bananas in a pack is aged differently.

In other words, it is matured according to each consecutive day so that consumers can enjoy eating bananas in their best condition.

This product led to an explosive response from consumers of many households. When you buy a banana, it rapidly rots in a few days, so throwing them away can be a lot of waste.

This brilliant idea of “one banana a day” doesn’t mean you should stop eating them after only one piece. It is just a challenge for you to have the freshest banana each day.

“One Banana for a Day” solved the problem of a single person living in one home.‎

Immediately after its launch, it became the most popular product of E-Mart and gained fame as a brilliant idea even to other countries abroad.

Every supermarket should come up with a brilliant idea like this. A single banana each day is enough. This way, no banana will go to waste.

This extraordinary 4-year-old girl beams with smile and pride even when...