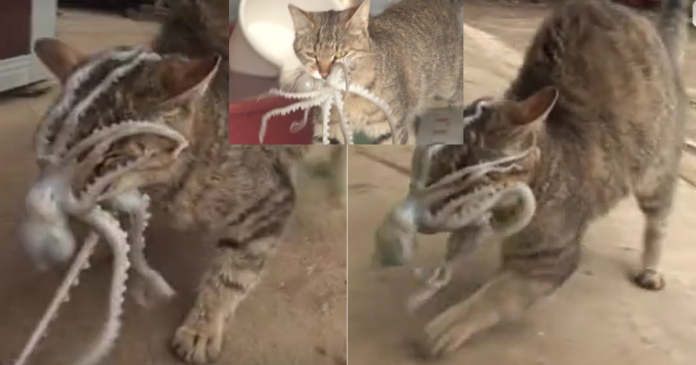 Every cat is a professional eater, and fresh seafood is an irresistible temptation for them. A shop in South Korea found that there are cats often stealing their live octopods, but they also face the counter-attack of the octopus, running backward and trying to pry them off!

▼A store in South Korea found that the live octopuses caught were often short, but later discovered that it was a nearby cat who often came to steal them… Look at this cat, it must be a skilled catcher!

▼But the feline thieves also have to pay the price, when they face the counter-attack of the octopus, and while it grasps its face tightly! The cat whose sight is blocked by its tentacles starts to panic and run backward, trying to pry them off!

▼These stray cats steal octopods for a reason, it is because the mother cat have just given birth to a litter of kittens and they need to supply their nutrition~

▼After catching the octopus, they try to chew them alive… though obviously, a live octopus is not easy to eat!

▼Finally, even if the store assigned a dog to guard the octopus pod, these skillful cat thieves still manage to steal the octopuses… when the dog finally falls asleep. Look at this cat’s victorious look!

However, eating live octopus can cause the cat’s trachea to be blocked, hence this behavior is not appropriate. Later, the good-hearted store owner still mixed octopus meat with cat food to feed these hungry cats!

▼Let’s take a look at this hilarious video!

The skill of these octopus-stealing cats is precise, though the shop owner took pity on them and gave these poor cats their share.

A regular walk through the forest for this man and his...