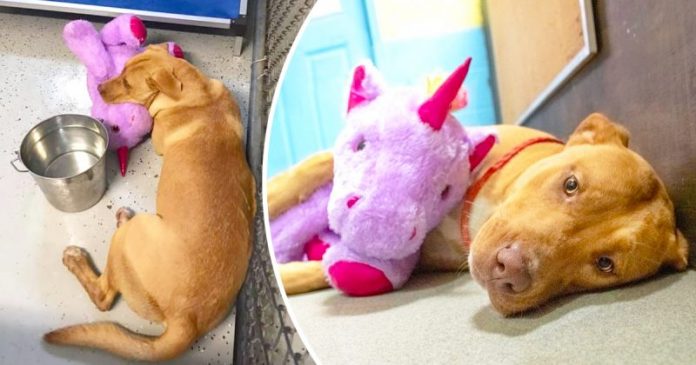 A street dog caught the attention of people around the world last week when he became the funniest thief in history after he was caught stealing a stuffed purple unicorn toy that became his favorite from a store in North Carolina.

According to CNN, the one-year-old male dog has stolen the same cute unicorn doll from the Dollar General store five times, prompting the store owner to call animal control officers to catch the ‘thief’.

Instead, with a feeling of sympathy and not to offend the feelings of this light-spirited dog, officials from Duplin County Animal Services were finally fascinated by his cuteness and bought the purple unicorn doll for him.

The dog, named Sisu, was then taken away from the scene with his beloved purple unicorn and was settled at a Duplin County animal shelter.

Duplin County Animal Services then uploaded a picture of Sisu with her unicorn doll on Facebook and it has become viral with over 22,000 netizen shares.

“This is what happens when you break into Dollar General consistently to steal a purple unicorn and still want to pursue it, but then the store owner called the animal control officer to arrest you for your mistakes and mischief. Everyone becomes fascinated with your prank and the officer buys it and brings it here with you,” the‎‎ post wrote.‎

A day after posting on Facebook, Sisu was quickly accepted by an adopter. Of course, the cute and soft-hearted Sisu brought along his beloved unicorn doll to his new home.

Sisu’s story of living on the streets and stealing the unicorn stuffed toy has ended and has gotten the attention of a new family. The story has gone viral and has touched many hearts.