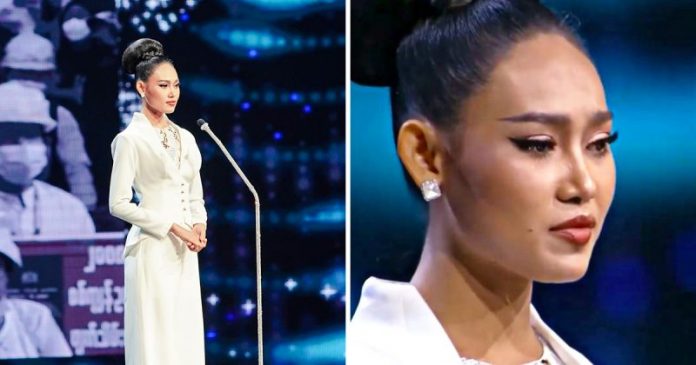 BANGKOK – Myanmar’s Miss Grand International pageant contestant boldly took advantage of her speech when appealing for international help to intervene in her country’s affairs as the military government continues to crack down on protesters since last month’s coup that has now killed more than 100 innocent civilians.

Yangon University student Han Lay made the speech at the Miss Grand International competition held in Bangkok, Thailand on March 27. When she issued the statement, at least 114 people had been killed on the bloodiest unfortunate day since the military junta’s coup on Feb. 1.

Han Lay openly expressed sympathy in a publicity video interview aired last week and also spoke out on her Instagram page, showing memes and pictures of protest movements in her homeland. It is not surprising to see participants in this international beauty pageant use the event to criticize their own country’s leaders.

“I have great sympathy for those who lost their lives on the streets. Every citizen in the world wants prosperity in their country and a peaceful environment. To do so, the leaders involved should not abuse power and act selfishly when governing the country,” Han Lay said.‎

‎“Today in my country, Myanmar, when I was on stage, many people are being sacrificed, over 100 people have died today. I deeply sympathize and grieve for all the civilians who lost their lives,” she said, pausing for a moment to hold back tears.‎

The bloodshed on March 27 in Myanmar drew international condemnation, both through diplomatic missions in Myanmar and even from abroad.

Several high-profile Myanmar nationals have used international platforms to criticize the coup and the new junta that rules the country.

Some Myanmar nationals who defected abroad expressed their allegiance to the declared alternative government, for which elected MPs were not allowed to occupy Parliament after the military acted to seize power.

Kyaw Moe Tun, Myanmar’s representative to the UN, has also defected by expressing his renewed allegiance at the world body’s official session while giving a three-finger salute in support of the protest movement at the end of his speech.

In Myanmar, celebrities from the world of entertainment and modeling also expressed support for street protests before the junta government launched a violent response to stop protesters.

Last month the junta government issued arrest warrants on several prominent actors and directors who openly supported the protests, charging them under public order laws that carry sentences of up to three years in prison.

It is very important to take note of Han Lay’s appeal, who participated in the Miss Grand International beauty pageant in Thailand. The country hosts 4 million migrant workers from Myanmar, most of whom are sympathetic to protesters, but fear their jobs may be affected if they speak out as Thai officials have warned against being actively involved in politics.

Hospital refuses pregnant mom for not being far enough into labor—they...