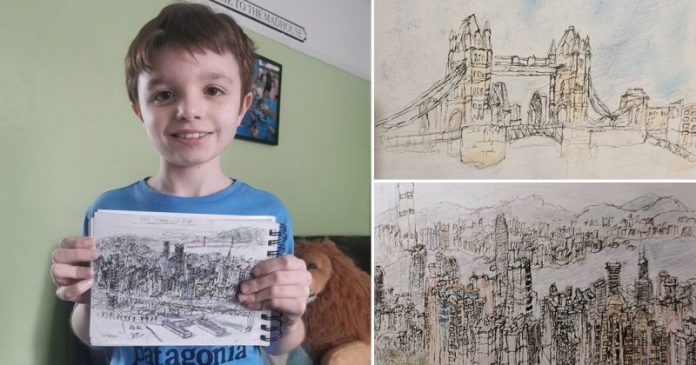 Every human being is born with his or her own strengths and weaknesses. Some people may seem to have a perfect life but otherwise, they may not be happy. Some individuals have great talent but due to their weaknesses, the journey to achieve success is quite difficult and winding.

An 11-year-old boy from the United Kingdom, a friendly child named Alex is said to have autism, a type of brain development disorder that causes him to have difficulty interacting and communicating.

However, Alex is a very talented person especially in the field of art painting. With just one look, Alex can produce a detailed drawing of the landscape of an area.

According to a Metro newspaper report, Alex Baker has been with autism since childhood. Yet as early as the age of two, Alex began to show a deep interest in painting. When Alex was five years old, his mother, Laura Jackson, began to realize the hidden talents of her special son.

It all started when Laura and her son were sightseeing in London. They were only there for a few hours but as soon as they arrived at their home near Liverpool, Alex started sketching. Alex was not only able to paint buildings but he was able to produce such an intricate painting depicting the landscape of the entire city of London.

“Alex has an amazing memory. He would spend time in the room painting. We are very proud of him.”

Meanwhile, Laura also revealed that her son was also able to produce paintings after visiting the area or seeing them in a book. The average time it takes Alex to produce a painting from his memory is around three hours only!

“I like to paint a dense city that has a lot of buildings. My favorite city is London. I really like the area because the buildings there are old and classic,” explained Alex.

Now, Alex has a great desire to travel to New York to see for himself the beauty of the buildings there and create great paintings. Although this child is not perfect, Alex seems to have a bright future already. Hopefully, Alex’s talent will continue to thrive.

10 most common fashion mistakes that many men do not realise

YouTuber from Vietnam Created His Own Ferrari Supercar and Amazes the...